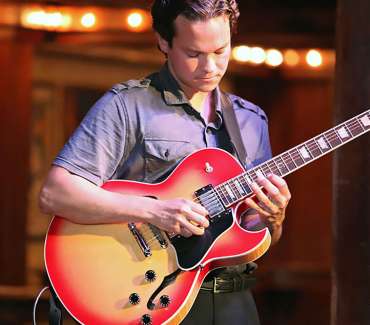 Award-winning guitarist and composer Joshua Walker began his musical journey at age 12. His career has afforded him the opportunity to perform with artists such as McCoy Tyner, Oliver Lake, Jon Irabagon, Steve Wilson, Sheryl Bailey, Joe Byrd, Gary Thomas, Ritchie Cole, Warren Wolf, and pop star Jason Mraz. He has been a member of groups that have opened concerts for artists such as Randy Brecker, Donny McCaslin, Pat LaBarbara, and Charlie Byrd and the Washington Guitar Quintet. In 2011, he won Downbeat Magazine’s annual award for ‘Best Blues, Pop, or Rock Solo By An Instrumentalist at the College Graduate Level’, which is open to a world wide pool of candidates.

Walker earned his undergraduate degree from Virginia Commonwealth University, began his graduate work at the Peabody Institute of The Johns Hopkins University, and completing his master’s degree at Howard University. During his time at Peabody, he received multiple scholarships, including the Charlie Byrd Memorial Endowment in Guitar, and received additional grants and scholarships during his time at Howard.

Walker continues to perform prolifically in settings ranging from large ensembles, to trios, duos, and solo guitar. His first album of all original music, ‘Inertia’, is available directly from his website, from Guitar Nine Records, iTunes, and CDBaby. In addition to Shepherd University, he teaches guitar at the Levine School of Music in Washington D.C. and at George Mason High School in Falls Church, Virginia.