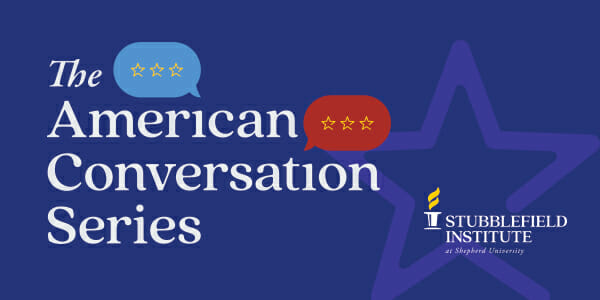 This ongoing series of public forums, each with multiple high-profile speakers representing all sides of the partisan and/or ideological aisle. The events—open to students and the public—will include elected leaders, well-recognized political media personalities, and influential experts in the field of media.

I81: The Road to Safer Highways

The Community Engagement Committee presents their next event- I81: The Road to Safer Highways. This event will discuss the safety concerns, trucker perspectives, and potential solutions to the highway nicknamed “Crash Alley”. This panel discussion will consist of Sheriff Nate Harmon, Delegate Don Forscht, Jim Ward, President of D.M. Bowman, and two individuals from the West Virginia Department of Highways. This conversation will be moderated by Amanda Carpenter. To register for this event, click here.

The Stubblefield Institute is working hard to create a future calendar filled with engaging conversations. Stay tuned for updates and event details.

The Stubblefield Institute is happy to unveil their first in-person event since the pandemic began. In a divided America, Van Jones controversially works across party lines on landmark criminal justice reform and a more humane response to the addiction crisis. Attempting to be a bridge-builder in a time of extreme polarization takes him deep into the inner workings of a divisive administration, internal debates within both parties, and the lives of front-line activists fighting for their communities. This film will be followed by a short break and a discussion with several guests shown within the film including Doug Copenhaver, Pete White, Louis Reed, and producers Brandon and Lance Kramer.  To view a trailer, click here. All guests must wear a face mask. 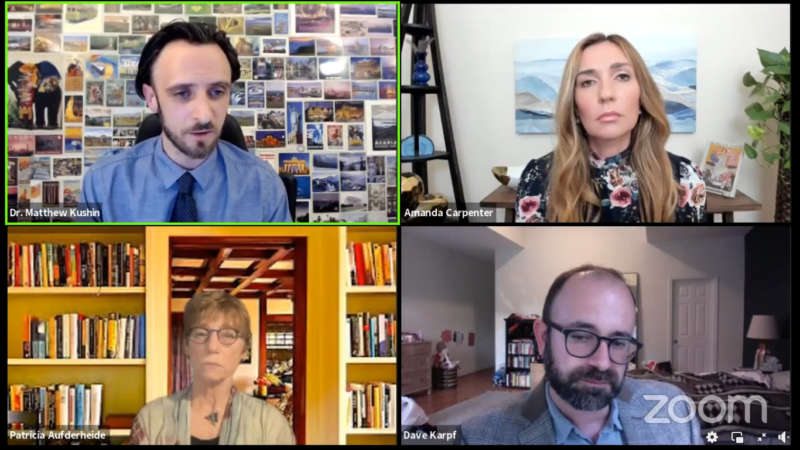 Freedom of Speech, Censorship, and the Cancel Culture: Social Media and Politics in Today’s America

The forum will be moderated by author and CNN contributor, Amanda Carpenter. The panel will feature Professor Patricia Aufderheide, University Professor, School of Communications and Founder, Center for Media & Social Impact at American University, David Karpf, associate professor in the School of Media and Public Affairs at the George Washington University, and Dr. Matthew Kushin, a communications professor at Shepherd University. The conversation will cover topics such as censorship, cancel culture, and social media regulation. If you missed the discussion you can watch it on YouTube or Facebook.

Our Community Engagement Committee is hosting another event on June 10th at 7 p.m. Redistricting at the State and Federal Level and What It Means to West Virginia and the Eastern Panhandle will feature a panel of Delegate Jason Barrett, Delegate John Doyle, Gary Wine, and Dr. Kenneth Martis. This event will be moderated by Hannah Geffert.

Man in the Middle: A Discussion with Senator Joe Manchin

Rarely in history has one Senator been in the position to cast deciding votes on so many vital issues as Senator Manchin is in today’s evenly divided United States Senate. This edition of the American Conversation, “Man in the Middle: A Discussion with Senator Joe Manchin” will discuss how the Senator perceives his unique role how he approaches the partisan terrain in the current political environment. Hosted by the Stubblefield Institute for Civil Political Communications at Shepherd University, moderated by Sarah Isgur, political analyst, staff writer, and host of the legal podcast Advisory Opinions for The Dispatch, and David Welch, Director of the Stubblefield Institute with a welcome by Shepherd University President, Dr. Mary J.C. Hendrix.

The ISMs: Facts and Myths of Socialism, Capitalism, and Populism

The Stubblefield Institute wishes to bring a panel of scholars together with a neutral moderator to explore the definition and philosophy of socialism, capitalism, and populism. We believe our audience is also interested in how the “isms” work together and should not always be isolated into pure economic or political theory. This event will feature an all-star panel consisting of Gary Wolfram, professor and an expert in free-market capitalism, Yascha Mounk, writer and educator who has written brilliantly on the rise of populism, and Dr. Aart Holtslag, esteemed Shepherd professor and researcher. This event will be moderated by Paul Solman, a longtime NewsHour correspondent. To watch this event, click here. 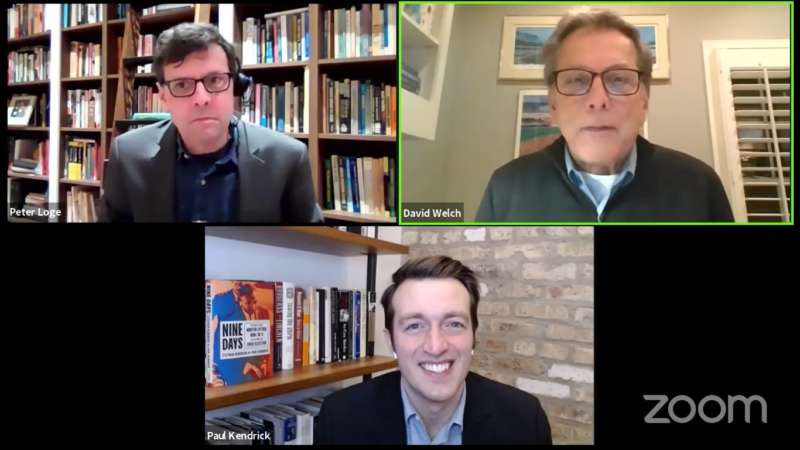 Meet the Author with Paul Kendrick

The American Conversation Series presents Meet the Author with Paul Kendrick, the co-author of Nine Days: The Race Save Martin Luther King Jr.’s Life and Win the 1960 Election. The program host will be Peter Loge, professor at the George Washington University School of Media and Public Affairs and Director of the Project on Ethics in Political Communication. You can view the event here.

2021 West Virginia Legislature; What are You Going to Do For Us? 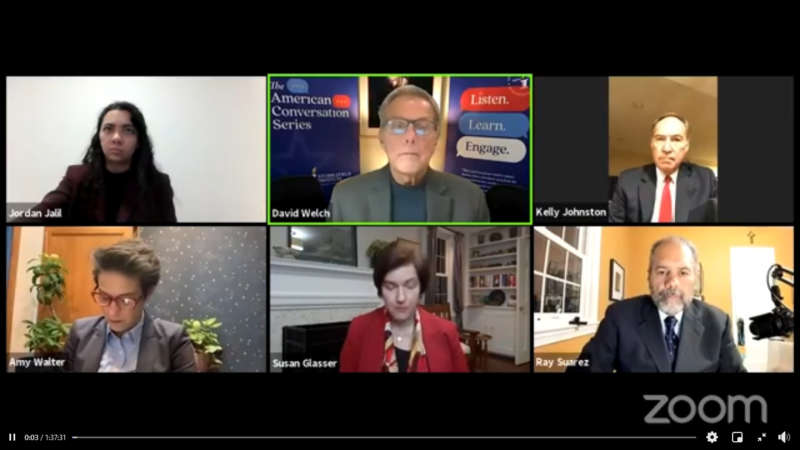 American Politics in a COVID-19 World: What Lies Ahead?

The forum features a panel of three nationally recognized journalists and media analysts who will share their views on the impact of the 2020 elections on our nation’s future, with a focus on how navigating the COVID-19 pandemic is changing the political and policy landscape. Panel members include Amy Walter, National Editor of the “Cook Political Report,” host of “Politics with Amy Walter” on WNYC, and a frequent analyst on “Special Report with Bret Baier.” A second panelist is Susan Glasser, co-author with husband, Peter Baker of the recently published “The Man Who Ran Washington: The Life and Times of James Baker,” correspondent for the New Yorker, and co-founder of Politico. Our third panelist is Ray Suarez, former host o “Inside Story,” on Al Jazeera American, former senior correspondent on the PBS NewsHour, and host of “Talk of the Nation” on NPR. The event will be co-moderated by Kelly Johnston, former Secretary of the U.S. Senate and Jordan Jalil, a senior at Shepherd University and captain of the Shepherd Debate Team, the 2019 collegiate national champions. The forum will be conducted on the Zoom conference platform with registered guests and carried via Facebook livestream. Watch the discussion here. 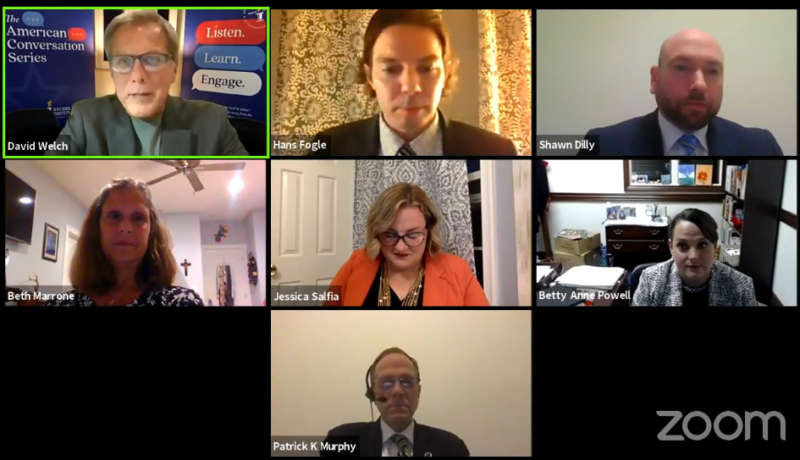 The Community Engagement Committee presents its first event featuring local educators and school administrators in a discussion of the CARES Act. This panel consists of Beth Marrone, Shawn Dilly, Betty Anne Powell, Jessica Salfia, and Dr. Patrick Murphy. This event will be moderated by Hans Fogle. The event will be a virtual Zoom meeting with live video and audio-only for the panelists and the moderator. Observers will be able to ask questions using the Zoom chatbox. The event will be recorded and posted to YouTube by the Institute for reference and for the benefit of those who cannot attend at the time of the event. To view this event click here.

The Stubblefield Institute recognizes the importance of West Virginia issues. In doing so we have created the Double Header Debates that will the 16th Senatorial Debate with Patricia Rucker and Pete Dougherty, followed by the Secretary of State of West Virginia debate with Natalie Tennant and Mac Warner. These debates will be jointly sponsored by the Stubblefield Institute for Civil Political Communications at Shepherd University and WRNR/TV10 Martinsburg. This will be a live, no-audience event, but would be carried on WRNR 740 AM and 106.5 FM, Cable Channel 10 in Berkeley and Jefferson Counties, and streamlined on both YouTube and Facebook. The debate would be recorded for several other re-broadcasts throughout the remaining 4 weeks of the campaign. These highly anticipated debates will be for meeting the candidates and their platforms while debating key issues of the state. You can view this program here. 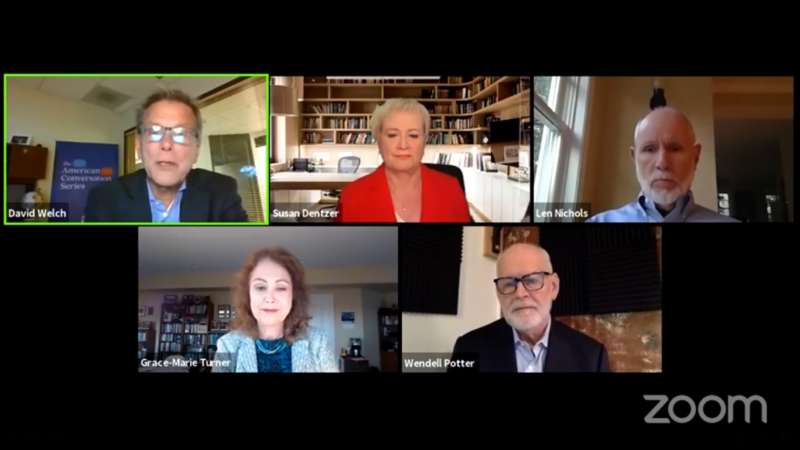 Healthcare: An Issue of Our Time

We now intend to focus an entire event on healthcare, our first forum devoted to a single issue. The Institute’s belief is that the debate over healthcare remains one of the most important issues amongst American votes and is especially intense during a presidential election year. Our goal is to demonstrate this issue can be discussed in a civil, authentic manner and more importantly, in a way that intelligent, solutions can be reached. Three healthcare policy experts with perhaps differing views in a moderated discussion. We have Grace-Marie Turner, Len Nichols, and Richard Master as the panelists with Susan Dentzer as our moderator. Questions will be submitted by the Shepherd University Debate and Forensics Team as well as the audience. Watch the conversation here. 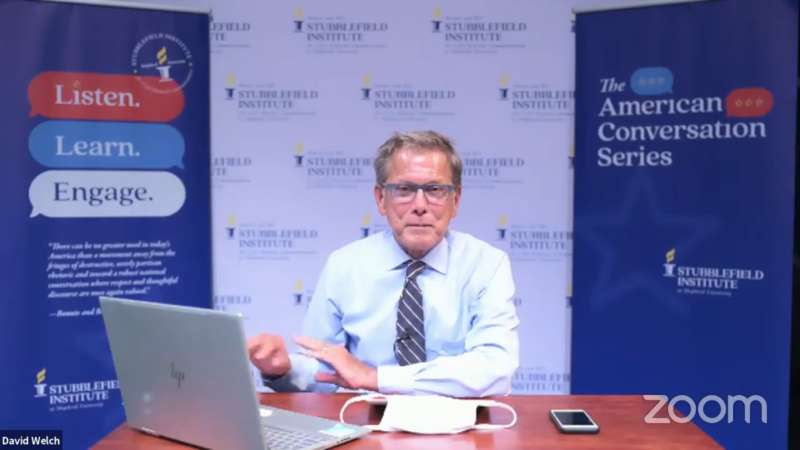 ACS: Fixing Congress: A Conversation with Derek Kilmer and Tom Graves, Chair and Cochair of the Select Committee to Modernize Congress.

This was the first American Conversation Series forum to be held “virtually.” We envisioned it as an interview question-and-answer format featuring Representatives Derek Kilmer (D-WA) and Tom Graves (R-GA), the Chair and Co-Chair of the Select Committee on the Modernization of Congress. We wanted to explore the background about the committee, thoughts of bipartisanship today, and strategies moving towards a more bipartisan approach to politics. We have chosen a few select issues and discuss how to move toward greater compromise. Audience questions were also invited. This event was hosted on Facebook Live and Zoom, you can view the event here. 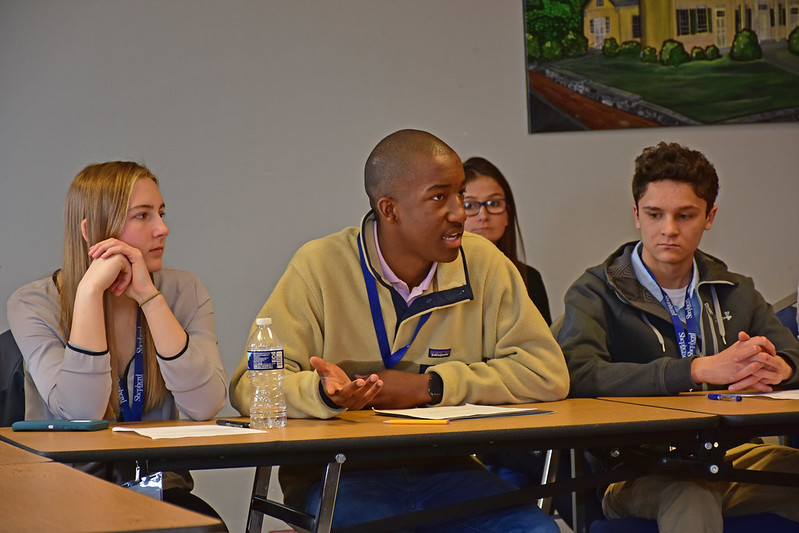 Students participate in a talkback about the simulation

This one-day seminar offers students an introduction to principles of leadership and strategic decision-making via presentations by practitioners, an introduction to academic theory and cases of principles of leadership and decision-making, and participation in a group simulation. The primary audience will be high school juniors and seniors, from pre-selected high schools in West Virginia and Maryland. The event will be a simulation led by Dr. Samuel Greene and faculty from the Political Science and Global Studies department. 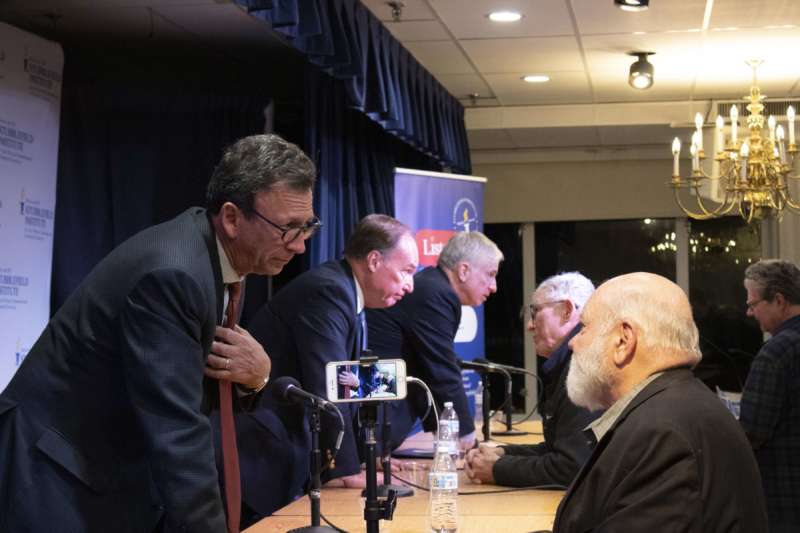 Panelist continuing the discussion after the conversation

The American Conversation Series: How to Talk Politics in an Angry America

On February 3, we will host “Talking Politics in an Angry America.” It will feature the following three panelists: Scott Widmeyer, former media director for President Carter, Vice President Mondale and Senator Rockefeller; Kelly Johnston, former Secretary of the U.S. Senate; and Frank Senso, former Emmy-award winning correspondent for CNN and currently the Director of the GWU School of Political Communications. Rob Fersch, founder and director of Convergence, an organization devoted to bringing divergent policymakers together and a seasoned mediator, will serve as moderator. The purpose of the forum is to conduct an open discussion on how we as Americans can communicate more productively across partisan divides. 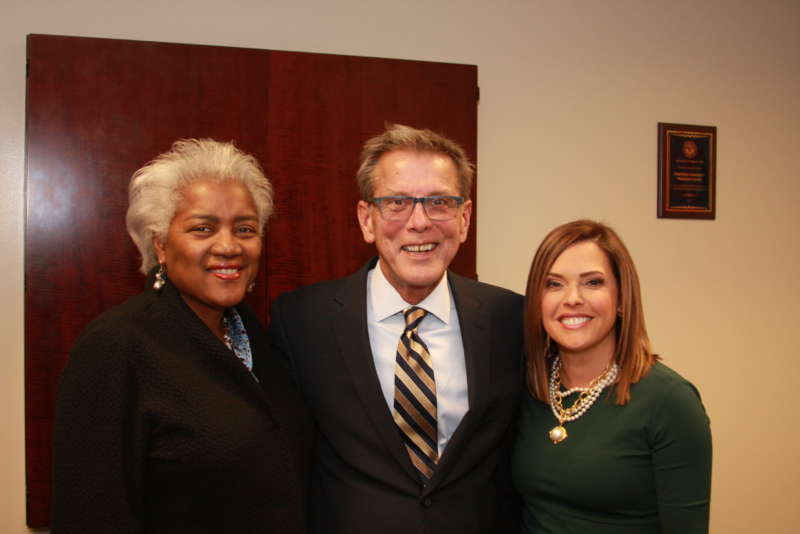 An Evening with Donna Brazile and Mercedes Schlapp: The State of Political Discourse in Today’s America. An American Conversation Series Event

An evening with Donna Brazile and Mercedes Schlapp. Two powerful women, former Democratic Party National Chairwoman and former White House Director of Strategic Communications for President Trump offering their unique perspective on how America can restore civility and positive discourse to a nation divided by its political differences. This event is from 6:30 – 8:00 p.m. at the Frank Center Theater. 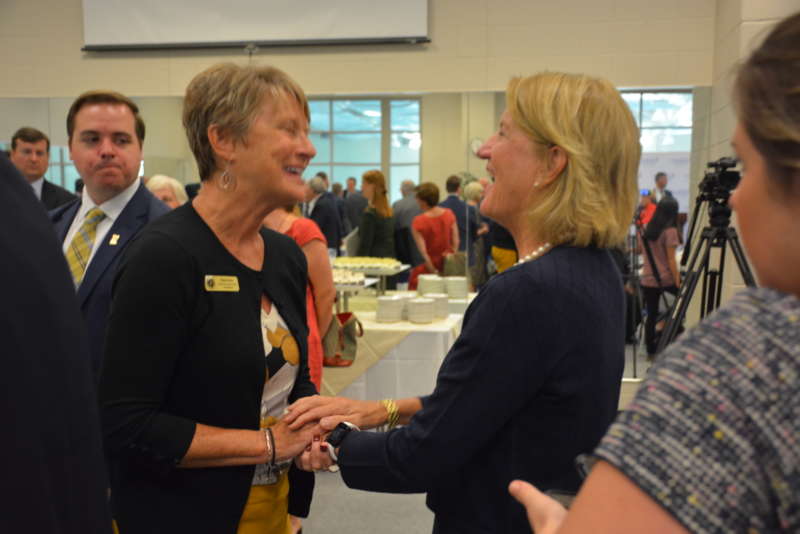 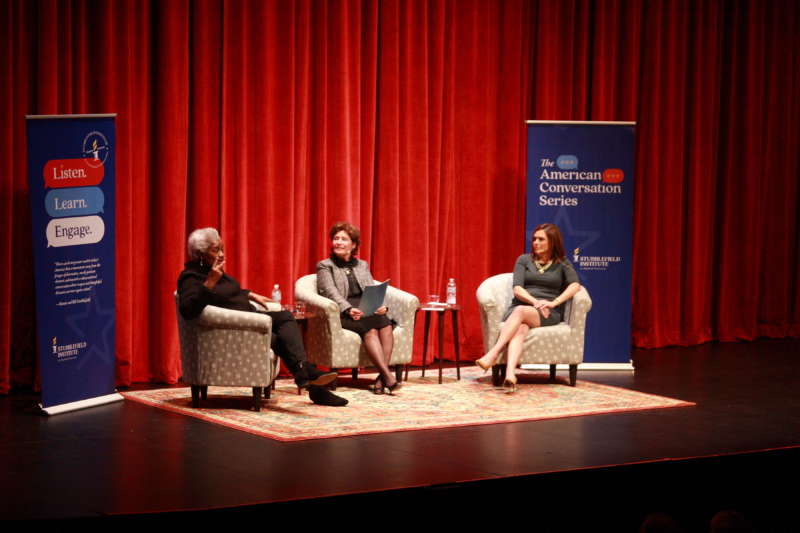 “The American Conversation Series” will continue with major public events in April 2020, with upcoming events in Fall of 2020.  Speakers and topics that often divide us as citizens are currently being scheduled. We invite you to stay tuned.

Candidate Town Halls and Debates will be scheduled throughout the year, according to the timetable of national and state elections. Invitations have been currently extended to all 2020 presidential candidates to visit Shepherd University.