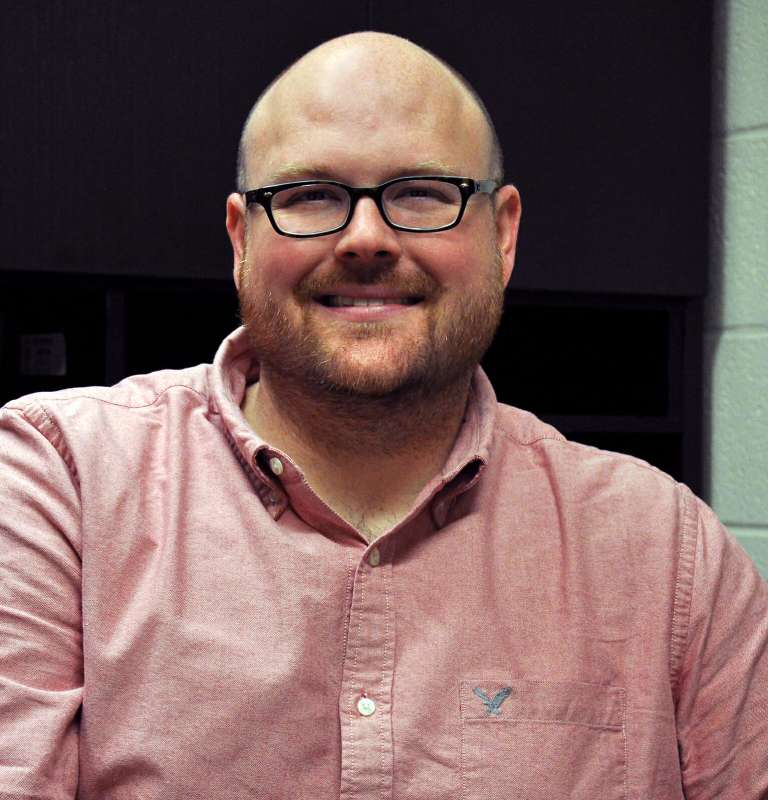 Dr. Jonathan Gilkerson, assistant professor of biology, is a coauthor of an article that was published in the journal “Science.” The groundbreaking research described in the article “Ubiquitin facilitates a quality-control pathway that removes damaged chloroplasts” was published October 23, 2015.

Gilkerson, who just finished his first year teaching at Shepherd, worked on the research as a National Institutes of Health Postdoc Fellow at the Salk Institute for Biological Studies Plant Cell Biology Laboratory in La Jolla, California. Through the research, Gilkerson along with seven coauthors, discovered a mechanism that allows plants to survive under adverse conditions.

Plant cells, like animal cells, have organelles, which are organ-like units that perform specific functions. Chloroplasts are organelles in plant leaves that use light energy to turn water and carbon dioxide into food used in the process of photosynthesis. Using the Arabidopsis, which is a type of mustard plant, Gilkerson and his colleagues discovered how plant cells deal with damaged chloroplasts.

“There’s a little tag that gets attached to the outside of these chloroplasts that’s called ubiquitin,” Gilkerson said. “The damaged chloroplast organelle is coated with this ubiquitin and that tells the cell to remove it.”

Gilkerson said it was previously not known that ubiquitin, which is a protein found in all tissue, was used to remove and recycle damaged chloroplasts from cells. He said the discovery has some real-world implications in agriculture and health care.

“We discovered when chloroplasts are damaged they are removed by a similar process to which damaged mitochondria are removed,” he said. “A lot of times plants offer better models to study related pathways than animals because plants can tolerate it better. You can make discoveries in different model organisms like plants or yeast that you couldn’t make by studying humans because of the nature of that model organism. Hopefully we can translate what is learned from plants to animals and humans.”

Gilkerson teaches cell biology and molecular biology and is continuing his plant research at Shepherd. 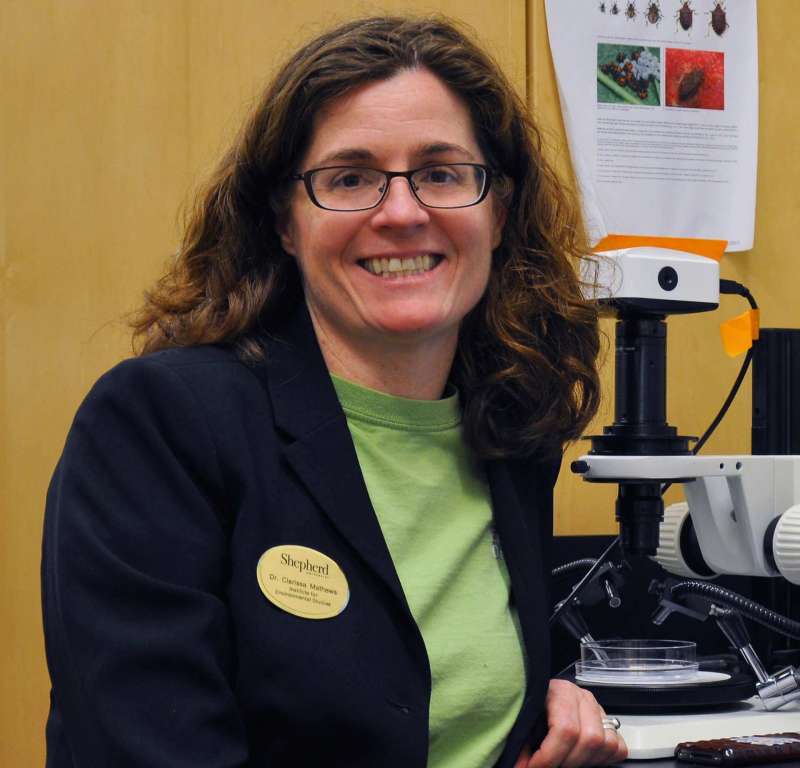 Mathews and four Shepherd students and alumni helped conduct the research, which they nicknamed stink bug CSI. Current Shepherd students majoring in environmental studies, McKenzie Allen, from Kearneysville, and Hector Nevarro-Guitz, from Shepherdstown, along with alumni Brittany Poling and Morgan Douglas, worked on the project, which was funded in part by USDA NIFA Organic Research and Extension Initiative.

Brown marmorated stink bugs are native to Asia and a few years ago their population exploded, causing great economic harm to local farmers and orchardists. BMSB were first discovered in this country in the late 1990s in Allentown, Pennsylvania. Initially it appeared there were no natural predators to control the bugs. This study looked at whether predators that are generally found at mid-Atlantic orchards and farms, like katydids, beetles, earwigs, and spiders, will eat stink bug eggs.

“This is the first time for this type of study,” Mathews said. “One of the surprising findings was that there are some natural predators in our local environment that are doing a good job of eating stink bug eggs.”

From May to September in 2014 and 2015, the researchers captured many of the predators at Red Bud Farm in Berkeley County or at the U.S. Department of Agriculture Appalachian Fruit Research Laboratory in Kearneysville. They also obtained some predators from commercial biological control companies.

The predators were given access to only water for one day, and then were placed in a container with a mass of stink bug eggs. Mathews and the students magnified and documented through photography and video whether the predators ate the eggs and how they ate them.

“The most surprising group was the katydid,” Mathews said. “The katydids are really good predators of the eggs. They devoured all the eggs in the egg mass and left no residue behind whatsoever. In fact, sometimes the katydids even ate the card the egg mass had been laid on.”

Mathews said another surprising predator was the jumping spider (Salticidae). They punctured the eggs with their chelicerae, a part on the spider’s mouth that allows it to puncture something and suck out the contents.

“They were not very efficient though,” Mathews said. “They had to do this over a long period of time, so they were not good predators like the katydids. They could not attack all 28 eggs, for instance.”

“Ground beetles are ubiquitous in agricultural fields, so that was a good indicator that we have another species or group of insects that could be helping in the fields,” she said.

Earwigs (Order Dermaptera) seemed to enjoy dining on stink bug eggs. Mathews said earwigs started eating at the top of the egg and chewed around it. The interior would be gone when they were finished but the shell remained.

“Over time gradually we started to see patterns,” she said. “After many, many replicates with each type of predator, these patterns started to emerge so that we could see a damage pattern and then link that to a predator.”

Mathews hopes the takeaway from the study is that there are naturally occurring predators that are helping farmers and orchardists keep stink bugs under control causing less damage to their crops.

“We shouldn’t underestimate the benefits of some of our predators that are out there in the agricultural system,” Mathews said. “Although they aren’t keeping the stink bugs totally under control, they are contributing. So we need to be careful to help our predators and not harm them by doing things like spraying pesticides when they’re not necessary.” 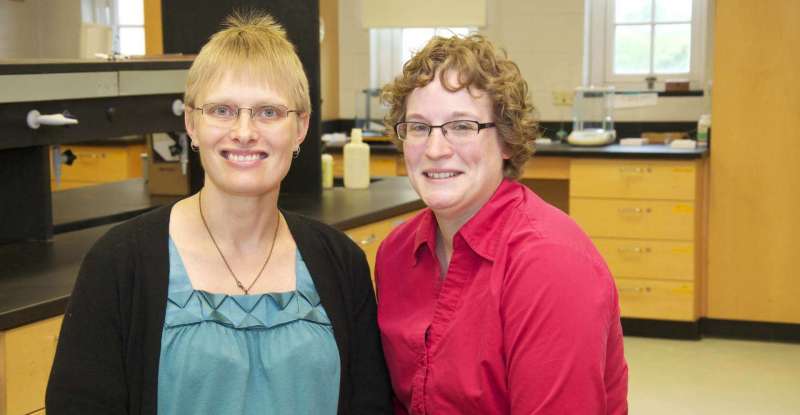 Shepherd University has received an extension of its public outreach grant from the West Virginia Space Consortium to help put on the third annual Seeding Your Future conference for middle school girls and to continue for a second year monthly science, technology, engineering, and math (STEM) workshops for high school students.

“Now students who attend the Seeding Your Future conference who are in the eighth grade can immediately transition into the workshop series and keep going with us,” Murphy said. “We love them, we hope they love us, and we hope to see more of them.”

This past school year Murphy and Mader organized eight two-hour monthly workshops that gave high school age students the opportunity to spend time at Shepherd participating in STEM activities. Murphy and Mader are hoping more eighth through 12th grade students will take advantage of the workshops this year, which will include topics like chemistry, robotics, environmental science, physics, math, and biology.

“They get to come for two hours and do something different every month,” Mader said. “Last year we had a lot of repeat attendees who enjoyed doing the different aspects of STEM.”

The Seeding Your Future Conference for girls is scheduled for Saturday, October 29, and is open to 125 girls in grades five through eight. The daylong conference offers the opportunity to meet women who have successful careers in STEM fields and to participate in hand-on workshops.

There is no charge to attend Seeding Your Future events. Visit http://seedingyourfuture.weebly.com for more information.