This presentation considers the life and works of Klaus Mann (1906 – 1949). Mann was the author of Mephisto and The Turning Point. Additionally, he was an early opponent of Nazism, an émigré from Germany who enlisted in the U.S. Army to fight the German fascists, and the eldest son of Nobel laureate Thomas Mann. Drawing from the research and manuscript preparation for his book, Selected Short Works by Klaus Mann, which appeared earlier this year, Nixon contends that Klaus Mann should, at a minimum, be considered a German-American author. Although his infatuation with and his hopes for the United States were short-lived, while in America, Klaus Mann dedicated himself to writing exclusively in English, and many of his late works make a rich contribution to twentieth-century American letters. 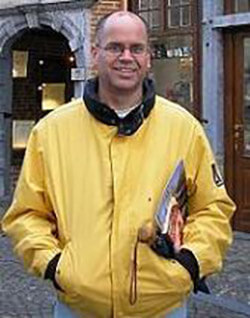 Dr. Timothy K. Nixon is an Associate Professor in the Department of English and Modern Languages at Shepherd University. After graduating from Belmont University, he spent a year in Germany as a Fulbright English Teaching Assistant. He holds an M.A. from The College of William and Mary, and he received his Ph.D. from The George Washington University. Dr. Nixon has published essays on the lives and works of Walker Percy, Kate Chopin, Eudora Welty, Herman Melville, Klaus Mann, Arturo Islas, Gertrude Stein, and Alice Dunbar-Nelson. Dr. Nixon’s translated and edited collection, Selected Short Works by Klaus Mann, was released in 2016.