Dr. Robert Tudor serves as Director of Vocal Activities, and Dean of the College of Arts, Humanities, and Social 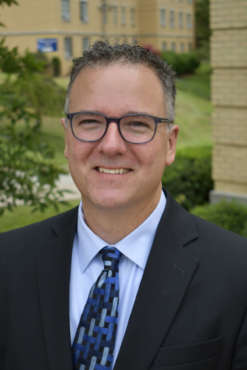 Sciences at Shepherd University. His multifaceted career has included work as a professional singer, educator, and non-profit executive, including leadership positions at Jacksonville University (JU), The Florida International Festival, The Association of Boarding Schools, American Classic Voyages, and Levine School of Music.

Robert served as Chair of the Division of Music at Jacksonville University from 2006 to 2012. While there, accomplishments included partnering with Jacksonville University’s College of Fine Arts Dean and Board of Trustees to lead a $.5 million a Kawai Elite Performance Instrument Collection (EPIC) partnership campaign, and developing recruiting strategies to double enrollment of music majors. Within the College of Fine Arts he partnered with the Chair for Visual Arts and Vice President for Academic Affairs to develop clearer procedures for faculty to report creative and intellectual activities, and co-led an initiative with colleagues from the Division of Theatre and Dance to generate annual collaborative performance projects.

Advocacy, entrepreneurship, and external partnerships have been his greatest priorities. He has empowered faculty to develop service-learning courses that develop skills in entrepreneurship and arts education. He partnered with organizations like the Jewish Community Center of Jacksonville and the Chamber Music Series at the Church of the Good Shepherd (among others) to bring innovative, student-driven programming to wider audiences. He also participated in fundraising campaigns with Family Promise of Jacksonville – a non-profit, interfaith hospitality network providing temporary assistance, hospitality and case management for families with children experiencing homelessness. In 2011, he directed The Rhythm of Life – a music theatre and dance collaborative, proceeds of which benefitted The Boys’ Home Association and Family Services of Jacksonville.

As Director of Opera and Music Theatre, he served as musical director for JU productions of Company, Oklahoma!, Ragtime, and Chess, and stage director for Dido and Aeneas, Chess, The Apple Tree, The Gondoliers, and created innovated opera and music theatre workshop productions annually.

As a singer, Robert has been praised by The Washington Post for his “powerful singing voice,” and “notable acting skills”. He has performed opera, musical theatre, cabaret, and concert works throughout the United States. Roles have included Papageno in The Magic Flute, The Lecturer in Dominick Argento’s monodramatic opera A Waterbird Talk, Freddy in My Fair Lady, and Murdoch in Titanic – A New Musical. Concert works include the Requiems of Faure and Durufle, Carl Orff’s Carmina Burana, Schubert’s Mass in G, and Saint-Saens’s Christmas Oratorio. Robert is a regular guest artist with the Montana Early Music Festival, and artist and instructor at the annual Helena Choral Festival in Helena, Montana.

A champion of innovative performance practice, Robert designed thematic art song recitals and concert works employing simultaneous projections of visual media (including paintings, sculpture), inspired by the poetry of the text, and performed them in the Washington, DC area, and in venues in North Florida. He created the role of Gouvenor Morris in Opera Theatre of Northern Virginia’s commissioned work Nancy, by Garrison Hull, and premiered an orchestral work for baritone and oboe soloists by Lawrence Moss, entitled Dawn to Dawn – Five Poems of the Tang Dynasty.

Dr. Tudor joined the faculty in the fall of 2012 as Chair of the Department of Music, which later would become the School of Music, and Director of Vocal Activities at Shepherd University.