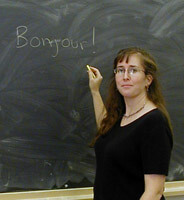 Dr. Rachel Krantz joined the Modern Languages faculty at Shepherd University in 2004 after teaching French and German for several years in the St. Louis area. Dr. Krantz received her M.A. from University of Munich in 1993 where she studied not only French but German and Spanish as well. However, a great deal of her learning took place outside the classroom in the various student jobs she held, ranging from cashier at Burger King to translator/secretary with international patent attorneys. After returning to the U.S., Dr. Krantz pursued doctoral studies in French at the University of Wisconsin-Madison, where she wrote her dissertation on Marguerite Duras, a prominent 20th-century French woman author.

Dr. Krantz’s areas of specialization include 19th- and 20th-century French literature, French and Francophone culture, and film studies. Her work focusing on French filmmaker Anne Fontaine includes “Anne Fontaine and Contemporary Women’s Cinema in France” appeared in The Rocky Mountain Review 62.2 (2008) and “Shifting Gender(ed) Desire in Anne Fontaine’s Nathalie…” was published in Situating the Feminist Gaze and Spectatorship in Postwar Cinema (2008). She is also passionate about the art of teaching and recently edited a volume of essays entitled Practical Approaches to Teaching Film(2009). For fun, Dr. Krantz likes to read, cook, garden, and explore the Appalachian mountain region.