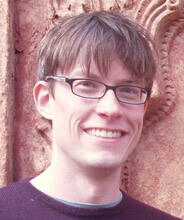 Dr. Mark Cantrell joined the faculty at Shepherd University in 2009, and he currently holds the position of Associate Professor in the Department of English and Modern Languages. He attended the University of Georgia for his undergraduate studies, receiving a B.F.A. in Drama and Theatre and A.B. in English. He earned an M.A. in English and Ph.D. in English with a graduate minor in Philosophy at the University of Wisconsin-Madison, where his studies focused on poetry and poetics, literary theory, and twentieth-century American literature. From 2005 to 2009, he taught American literature, world literature, and poetry at the University of Miami in Coral Gables, Florida.

Dr. Cantrell has published essays that treat the works of John Cage, Joan Retallack, J. L. Austin, and Jacques Derrida. He has also published an essay on teaching heavy metal adaptations of Herman Melville’s Moby-Dick. His main research interests include experimental poetry and poetics; modernism, postmodernism, and the avant-garde; and the relationship of literature to other disciplines and fields, especially philosophy, cognitive science, and music. His current book project articulates a theory of “enactive poetics” to explain how readers bring poems to life in their enactment of the thought processes that such texts embody.