My current book project examines Algerians’ use of humor during the country’s “Dark Decade” of the 1990s. While a conflict that leaves 100,000 dead is no laughing matter, Algerians of varying backgrounds employed jokes and cartoons to express powerful ideas concerning the war’s major events and to redefine their position in the conflict, their communities, and the broader Algerian “nation.” De-mock-ratiyya: Humor, History, Protest, and Violence in Algeria, 1988 to 2005 argues that this comedy attested to the globally informed and creative ways that Algerians overwhelming rejected the bloodshed and struggled to survive amidst a conflict marked by random violence. I thereby undercut stereotypes, still prevalent in media and scholarship, of the war as stemming from lingering hatred towards the country’s former colonial power, France, and break with previous literature by centering my narrative on the experience of the pacifist civilian majority. Informed by theories of humor, culture, and power and drawing upon oral interviews and media archives in Modern Standard and colloquial Arabic, Tamazight, and French, this project demonstrates the importance of humor as an instrument of social memory construction, war, or peace as well as a source for retracing volatile, contested pasts. This finding will interest historians of the Middle East and beyond seeking to better understand what Asef Bayat has coined social non-movements, groups of individuals linked through political culture like humor whom Bayat contends proved essential to the Arab Spring revolutions of 2010-2011. My talk will present the part of this work that looks at humor’s potential role in driving Algeria’s October 1988 Revolution, often cited as a precursor to the 2010-2011 “Arab Spring” uprisings. 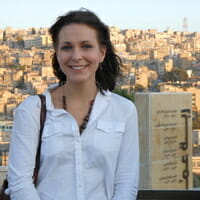 Dr. Elizabeth M. Perego is a historian of contemporary Algeria and its global and regional connections. Her scholarship examines the intersection of politics, culture, and gender in country as well as the modern Maghrib more generally. She is currently completing a book project entitled, De-mock-ratiyya: Humor, History, Protest, and Conflict in Algeria, 1988 to 2005, which explores comedy as a site of identity formation and expression of political ideas at times of heightened crisis and censorship. She looks forward in the near future conducting new research into the transnational and transregional histories of African identities and feminism across the Sahara and Middle East. Dr. Perego received her Ph.D. from the Ohio State University in 2017 and was an Assistant Professor of History at Shepherd University.