Stories I Ain’t Told Nobody Yet 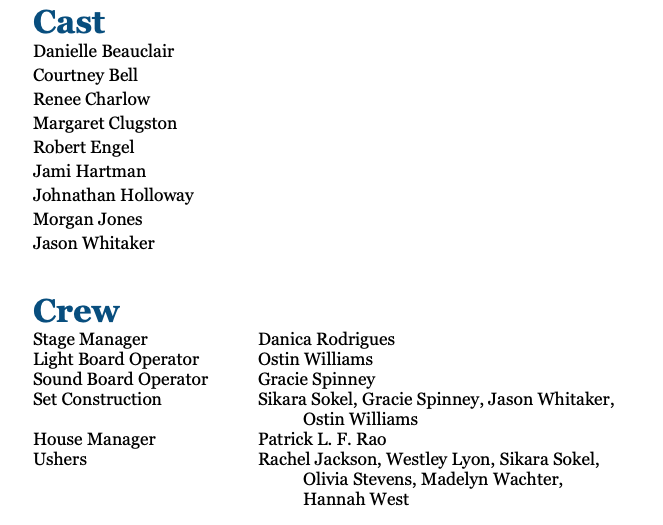 Danny Beauclair is a Theater Major from Martinsburg WV.  She is both an actress and a playwright; this is the third play she has acted in with the department. She most recently performed the role of Sasha in Orlando, and Jane Haley in The Tomb of King Tot. She has also performed in Antigone, Andromeca, Othello, and Tea & Arsenic.

Courtney Bell is a freshman theater major from Manassas, VA. She has previously appeared in The Trojan Women and Mamma Mia!, and directed The Wedding Story in high school. She is very happy to be a part of this production.

Renée Charlow holds a MFA in Theatre Pedagogy. Renée worked as the personal assistant to legendary poet and feminist, Ntozake Shange, from 2014-2018, and wrote the afterword for Shange’s new book, Dance We Do. Renee’s most recent Theatre directing/producing credits include: for colored girls who considered suicide when the rainbow is enuf, That Color Blind Kind of Love, Mayor for Life, The Colored Museum,  and A Photograph: Lovers in Motion.  Recent acting credits include The Ties that Bind, Skeleton Crew, The Comey Rule (film) and  a commercial for The Motley Fool.

Maggie Clugston, a sophomore Theatre Minor, was in many productions in her hometown high school, and is thrilled to be making her Shepherd stage debut in this production of Stories I Ain’t Told Nobody Yet. She is from Frederick, MD and is elated to be able to perform again. She is grateful to her friends and family for their support of her following her heart and pursuing her passions and everyone involved in this production for finding a way to help theatre survive in spite the circumstances.

Robert Engel is a third-year transfer student from Blue Ridge CTC. This is his first year at Shepherd and first college production. At Hedgesville High School, he appeared in Shrek the Musical, Aida, and Disney’s The Little Mermaid Musical. Robert’s favorite role is Puck in Midsummer Night’s Jersey. He has also written and directed his own one-act play, Mysterious Case of Daniella Hale. Robert is a Communications majorwith a minor in Theatre.

Jami Hartman is a sophomore at Shepherd University majoring in Theatre.  She has been involved with theatre since she was in middle school, and she plans to teach high school theatre and English after graduation. This is her first performance with Shepherd University.

Johnathan Holloway has previously appeared onstage in The Ancient Battle, Above the Snake Lake, and The Eternal Victory. His touring experience includes the East Coast Tours of Stools and Chains. He has studied acting at both Shepherd University and Valley Forge University; this is his first role in a Shepherd Theater Production.

Morgan Jones is a theatre major in her second year with the Shepherd Theater Department. She previously trained at T. Schreiber Studio and the American Academy of Dramatic Arts, both in NYC. She is best known for her work in the play Dear Eleanor and her appearance in the short film “Circle.” This is her first role at Shepherd.

Jason Whitaker is a Shepherd Theatre major and tri-state performer. His most recent stage roles include Peter in Peter and the Starcatcher, Jim in The Glass Menagerie, and Leaf Coneybear in The 25th Annual Putnam County Spelling Bee. Jason has studied at Upright Citizens Brigade (NYC), The Unified Scene Theater (DC), The Pit NYC, and DC Improv. He currently writes for the military satire rag DuffelBlog.com. Jason is an Air Force Vet and thanks his friends, family, and director kb for their support and guidance each day.

a note from the director: why purple?

over the past few nights, we’ve shared our stories with people, and there has been one consistent question i’ve gotten from audience members: why did you choose purple as the only color? …& enough people asked that i thought i’d take a moment to share:

i have directed & produced this piece a number of times in a number of very diverse places —in cities in virginia, in the mountains of west virginia, etc.—and i’ve always been struck by the universal truths in Carson’s stories. when Patrick, our costume designer, and i began talking about the world of this play & how it could translate into garments that were as universal as the stories, we settled on the dark denim/gray combination… but we knew something was missing. we knew that we needed some kind of accent, but weren’t sure what. we went back to the core reasons i love sharing this particular text. these stories remind us all of the human truths that bind us: love for others, the ties of family, connections to community, and concerns over good health.

so there we were: in the midst of a global pandemic, just weeks from our national election, with the chance to share stories that tie us together in a world trying to divide us. at a time when we’re all bombarded with messages that try to convince us of the divides between the cities & the suburbs, between rich & poor, between races, cultures, communities, etc…  the missing piece to our costume puzzle needed to be one that reminds us that we’re all in this strange time together. i decided we’d echo President Obama’s claim that there were no red states & no blue states —only the united states… & the combination of red & blue is purple.