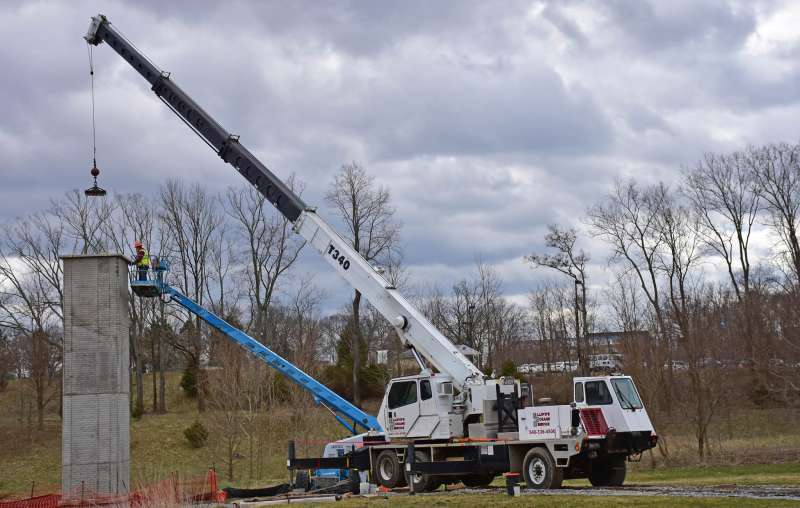 Jim Schmitt of Schmitt Construction Company adjusts the crown as it was placed on the top of the new chimney swift tower on West Campus.

Chimney swifts returning to Shepherdstown from South America this spring will be able to move into a new home on Shepherd University’s West Campus. An agreement between Shepherd and the Potomac Valley Audubon Society (PVAS) allowed PVAS to have a 30-foot tower constructed next to Dunlop Hall to serve as a migratory stop for the swifts.

The new tower is intended to replace the chimney on Sara Cree Hall that swifts used for a roost before the building was torn down in 2017. Schmitt Construction Company of Shepherdstown built the new tower, which was engineered by Alpha Associates and will be able to host up to 5,000 birds.

The tower is constructed of poured in place concrete made with forms that created a brick pattern. There is a sewer drain in the center, conduit for the future installation of electric and cameras, and an access door on south side. The original plan was to paint the outside of the tower red to match Dunlop Hall, but it will be painted yellow after the concrete cures for 30 days.

“Red is a difficult color to maintain because of the pigment and I suggested the yellow to go along with the motif of Sara Cree Hall,” Schmitt said. “Maybe the birds will appreciate that.”

The new tower will serve as a learning tool for Shepherd students. Dr. Sher Hendrickson, associate professor of biology, plans to have students in the Field Ornithology class count chimney swifts and help monitor the tower’s success as part of their field lab.

“I will also be developing labs around the chimney swift project for the General Biology class to encourage a strong conservation ethic among students from disciplines across campus,” Hendrickson said. “I think the chimney swift tower is not only important to mitigating the loss of the migratory stopover site we removed when we demolished Sara Cree Hall, but it will also be a way to raise conservation awareness and ethics for our students.” 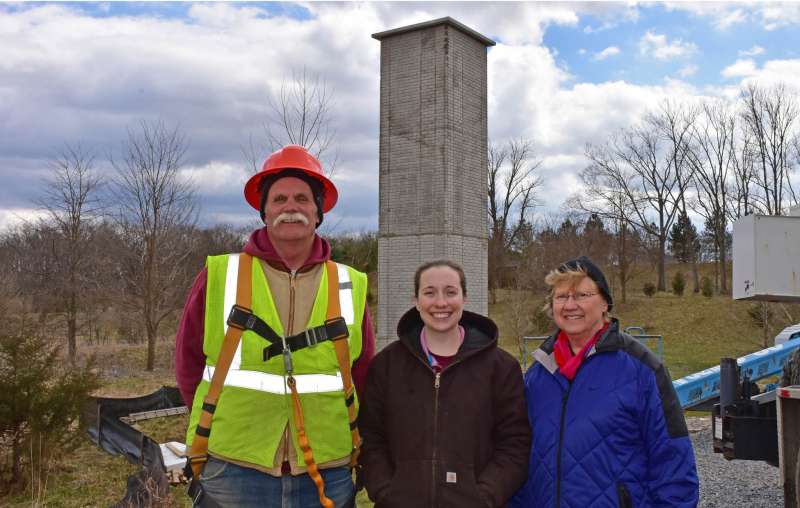 PVAS’s involvement in the project came about because its members have helped monitor the swifts for more than 20 years. Suzanne Offutt, PVAS president, said when the chimney stood at Sara Cree Hall, Shepherdstown was the largest spring and fall roosting site for swifts in the state of West Virginia, so she sees replacing that chimney as a significant step toward preserving the species.

“We are grateful to Shepherd for providing the space for the tower, enhancing the habitat, and working in a collaborative manner to build the tower—and just in time for the chimney swifts that will be here any day after their 6,000-mile arduous migration north,” Offutt said. “Shepherdstown is their summer home where they’ll eat thousands of insects every day, raise their young, then regroup in their selected roosting sites. We’re so relieved they’ll have a roost ready for them at their journey’s end this spring.”

Kristin Alexander, PVAS executive director, said the society appreciates those who have helped cover the costs and is still looking for donations to finish paying for the tower.

“These folks recognized the urgency of replacing this tower as soon as possible because of the unique migration needs of chimney swifts,” Alexander said. “This is a community project that will support Shepherd students’ academic experiences and contribute to international scientific research. We’ll be hosting Swift Night Out events to count the swifts at the tower to monitor its use. These events are great opportunities for community members to contribute to science while witnessing a natural phenomenon as the swifts dive into the tower for the night.”