History of the Center

The idea to create a “Center for the

Study of the Civil War” at Shepherd University came as a result of 1990 discussions between officials from the University and Antietam National Battlefield. The role of the Center initially was envisioned as a “keeper of the standards” for the Park Service’s “Civil War Soldiers System”(CWSS) database that was to undergo development. The CWSS consists of several fields of basic data taken from index cards that are keyed to a soldier’s service records kept at the National Archives.

In August 1991 a Civil War Soldiers Database Planning Conference was held at Shepherd College (now Shepherd University). Participants included Park Service personnel, Shepherd University staff and faculty, and several noted Civil War scholars. The conference attendees concluded that Shepherd could enhance the NPS project by overseeing the academic integrity (quality control) of any database enhancements and assuring that proper data standards are maintained. Additionally, the packaging of subsets of data for educational uses was seen as a possible function of the center. During this conference it also was suggested that Shepherd could initiate its efforts by demonstrating how a database subset (to the NPS data base), such as West Virginia’s Union soldiers, might be enhanced by including data gleaned from census records, pension files, and other sources.

After much planning and debate during the next year and a half, a second conference was held at Shepherd in March 1993. By this time, a Scholars’ Advisory Board for the Center had been named, and all board members were in attendance. Other conference attendees included NPS personnel, Shepherd staff and faculty, local and state educators, and interested citizens. Much discussion occurred over the scope of Shepherd’s efforts in the development of the database. It was generally agreed that the NPS database would not be of much use to scholarly historians; as such, Shepherd should include information taken from the soldiers’ “Compiled Service Records” and “Pension Files” located in the National Archives. In addition, it was debated whether data from the 1860 and later censuses should be included; the consensus of the group was that adding census data would be even more time consuming, and that priority should be placed on the service records and pension files. Finally, most of the conference attendees agreed that the educational function of the center would be as important as the database itself. A scholarly question and answer period followed, which was broadcast on the C-SPAN television channel.

During the next several months a nationwide search began for the first director of the Center for Study of the Civil War. In September 1993, Civil War historian Mark A. Snell, a retired Army officer and former assistant professor of history at West Point, was hired; he began his duties on November 16, 1993.

The Center began hosting a summer seminar for social studies teachers in 1994 that was made possible by a grant from the West Virginia Humanities Council, and annual summer seminars beginning in 1995 that were open to the general public (for a fee). The Center’s database manager/programmer developed the data-entry software and two historical-records specialists began entering data in August 1996. The records specialists worked on only one regiment at a time, with random quality control audits occurring on a weekly basis. 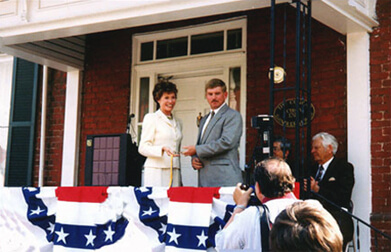 In September 1995, actress Mary Tyler Moore donated the Conrad Shindler House to the Center. This house, erected around 1795, was owned by Ms. Moore’s great, great, great grandfather during the first half of the nineteenth century. During the Battle of Antietam in September 1862, the Shindler House, like most of the other buildings in Shepherdstown, received wounded Confederate soldiers. All operations of the Center relocated to the Shindler House in April 1996. In honor of Ms. Moore’s father, the Center was renamed the George Tyler Moore Center for the Study of the Civil War.

While working closely with the National Park Service and its Civil War Soldiers System, the George Tyler Moore Center of the Study of the Civil War conducts its mission independently and is a division of the Shepherd University Department of History.