SHEPHERDSTOWN, WV — The Shepherd University Foundation announces the creation of an endowed scholarship in support of students pursuing studies in education. The Miller-Waters Family Scholarship was created by Emily Miller Waters and Althea Vickers Miller, both 1957 graduates, to honor their family’s legacy at Shepherd.

Emily Waters serves as matriarch of a family that boasts nine Shepherd graduates over three generations. The Miller-Waters alumni include Waters’ late brother, Frank Miller, class of 1955, and his wife, Althea Vickers Miller; son and 1990 graduate Daniel Waters and wife Sonja Youngblood Waters, who graduated in 1999; daughter-in-law Wanda Evy Waters, class of 1989; and two grandsons, Zachary Waters, class of 2013, and Ethan Waters, class of 2019, along with Ethan’s wife, 2016 graduate Jacqueline Kowalski Waters. All majored in education except Daniel Waters, who earned his degree in business administration, and Zachary Waters, who majored in communications.

“It was my granddaughter-in-law, Jackie, who first noted how many teachers we have in our family,” said Emily Waters. “And all of them are graduates of Shepherd.”

The realization inspired a family photo featuring all nine Miller-Waters alumni set against the backdrop of historic McMurran Hall with its banner celebrating Shepherd’s 150th anniversary. It also prompted Emily Waters to endow a named fund in tribute to her family’s enduring legacy at Shepherd. Her sister-in-law, Shepherd classmate, and dear friend, Althea Vickers Miller, helped to enrich the fund with a generous gift of her own.

“As a student, I felt like it was an honor just to be able to attend college,” said Waters, who graduated with honors and earned the designation of Outstanding Home Economics Student. “I just love Shepherd.” 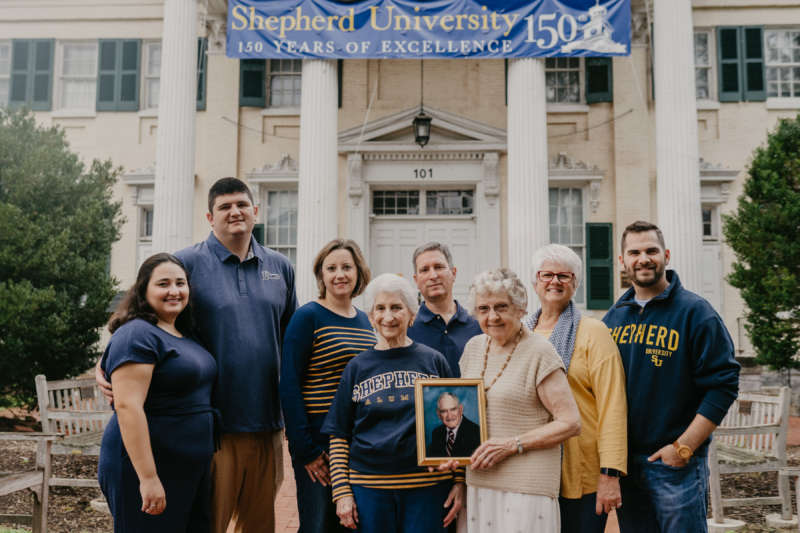