Cook said the genesis of the composition is a place in this region that is special to him—Fox Gap on South Mountain in Maryland.

“I’ve hiked all over South Mountain and I’m kind of in love with the place,” Cook said. “‘Dawn at Fox Gap’ has to do with that whole area and just how beautiful it is up there.”

Cook said he had been working on the composition for quite some time when he took a sabbatical in 2016, which gave him a block of time to focus on finishing it. Hippensteel then asked to have the Shepherd University Wind Ensemble premiere it.

“The greatest gift any composer can be given is to see his music brought to life by great musicians,” Cook said. “Dr. Hippensteel just got a hold of that score and he brought it to life. He turned it into a living, breathing thing. It has some challenging parts in it and I thought it was going to be too difficult to pull off, but Dr. Hip and the young people pulled it off. It was an astounding experience to hear that music come to life like that.”

The composition, distributed by Subito Music, is Cook’s first wind ensemble composition. It is a 20-minute piece that Cook describes as a contemporary symphony in one contiguous movement. The American Prize is judged solely through recorded performance. Cook submitted a recording from the 2018 concert performance of “Dawn at Fox Gap” by the Shepherd University Wind Ensemble and dedicated the entry to Dr. Scott Allen Hippensteel and the Ensemble.

“There were a lot of layers that had to be put together correctly rhythmically and tonally,” Hippensteel said. “It isn’t just your conventional harmonies, so it takes a little more depth of understanding from the ensemble and conductor and we had to work at it. I thought it was a really great opportunity for us.”

Hippensteel said he liked having Cook available as a resource while the Wind Ensemble prepared for the concert. Cook attended some of the rehearsals to offer comments to the students.

“I think it was meaningful to our students because many of them had classes with Dr. Cook and they know him,” Hippensteel said. “They thought it was a really exciting opportunity to bring his music to life. They had a lot of fun with it and practiced to make it sound as good as they could.” 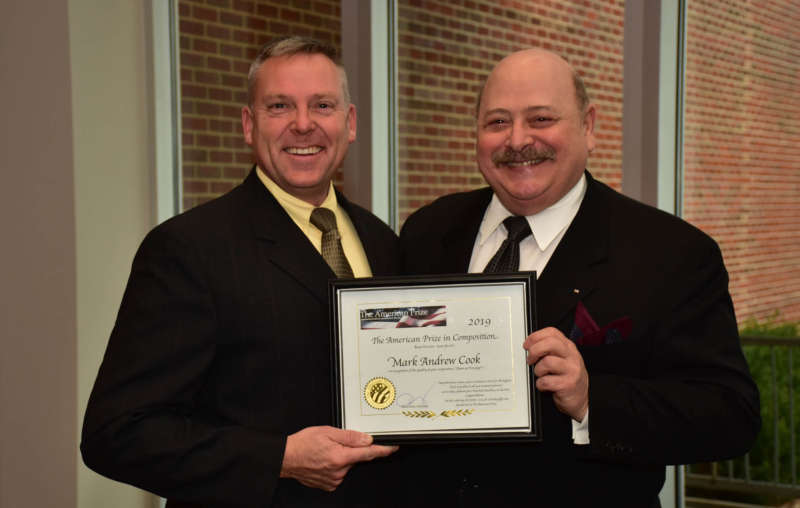