Dennison, who will deliver the undergraduate address at 1:50 p.m. in the Butcher Center, will be awarded a Doctor of Business honorary degree during the ceremony. Alumnus Karl Wolf will be awarded the President’s Award for his service to the university.

Washington, who will deliver the commencement address to master’s and doctoral degree candidates at 11 a.m. in the Frank Center, will receive a Doctor of Business honorary degree during the ceremony.

His vision to reimagine and revitalize the Southern West Virginia economy has led to extensive media coverage, including appearances on Moyers & Company, West Virginia Public Broadcasting, CNN, the 2014 National Geographic documentary “From the Ashes,” and the Starbucks original series “Upstanders,” as well as feature stories in the Chronicle of Philanthropy and Wall Street Journal.

Dennison graduated from Shepherd University in 2008 with a Bachelor of Arts in history and a Bachelor of Science in political science. He served five years as youth director at Shepherdstown Presbyterian Church, and simultaneously served three years as faith outreach coordinator for the West Virginia Wilderness Coalition. In 2014, Dennison was named to the 40 under 40 list by the West Virginia State Journal. He recently completed the Community Progress Leadership Institute at Harvard University Law School and participated in the Clinton Global Initiative. He holds a master’s in public affairs from Indiana University, with a concentration in nonprofit management. He was honored in October 2018 by Shepherd University as a member of the inaugural class of the Alumni Association’s Finest Under 40.

The Rev. Dr. Jamie Washington is the president and founder of the Washington Consulting Group (WCG). In October 2015, WCG was named by The Economist as one of the Top 10 Global Diversity Consultants in the world. Washington has served as an educator, administrator, and consultant in higher education for more than 34 years. He is the president and co-founder of the Social Justice Training Institute and the immediate past president of ACPA: College Student Educators International.

Washington earned his Bachelor of Science degree from Slippery Rock State College; two Master of Science degrees from Indiana University-Bloomington; a Ph.D. in college student development from the University of Maryland College Park; and a Master of Divinity degree from Howard University School of Divinity. He has received many awards and honors—most recently he was honored with the University of Maryland Baltimore County’s Legends of Excellence Award for his contribution to the lives and education of Black and LatinX faculty, staff, and students. He is a member of Omicron Delta Kappa, Golden Key, Alpha Phi Omega, Phi Delta Kappa, and a life member of Alpha Phi Alpha fraternity. He serves as pastor of Unity Fellowship Church of Baltimore and is an elder in the Unity Fellowship Church.

Karl Wolf graduated from Shepherd in 1970 with a Bachelor of Science degree in business administration and earned an M.B.A. from George Washington University in 1973. For more than 40 years, he has served his alma mater in various capacities of both a professional and civic nature. He served as director of admissions from 1970 until 2004, at which time he was named director of athletics. In 2009, he was named assistant to the vice president for academic affairs for compliance and athletic initiatives, a role in which he served for four years until his retirement in 2013.

Now retired, Wolf remains involved with several student organizations at Shepherd. He has served as advisor of the university’s Lambda Chi Alpha chapter since its 1975 inception. He also serves as advisor to the Epsilon Kappa chapter of the Delta Sigma Pi business fraternity.

A longtime member of the Shepherd University Foundation Board of Directors, Wolf now serves in the role of director emeritus. In 1992, he received the Richard Apperson Award from the Potomac and Chesapeake Association for College Admission Counseling in recognition of his extraordinary service to students. In 2003, the Shepherd University Alumni Association recognized his achievements by naming him Outstanding Alumnus of the Year. 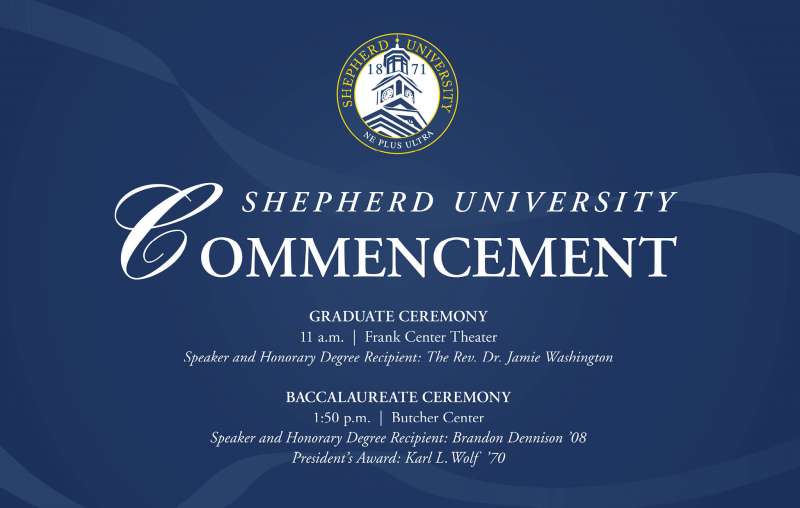