Art professor featured on READ poster with his favorite book

SHEPHERDSTOWN, WV — Shepherd University’s Scarborough Library had extra help unveiling the newest READ poster during a short ceremony Thursday, December 12, in the West Virginia Room. The poster features Dr. Chris Coltrin, assistant professor of art history, and his four children were on hand to remove the sheet revealing a picture of Coltrin sitting in front of the Center for Contemporary Arts holding his favorite book, “Les Misérables,” by Victor Hugo.

“It’s a combination of a really compelling story which gives you characters to admire, to empathize with, and to connect with,” Coltrin said. “But I also think it’s just one of the most purely beautiful things I’ve ever read. So the prose is something that to me sets it apart.

“I knew about the story a little bit before I read the book, but the thing that surprised me was for the first time in my life I felt like the way it was written matched the quality of the story,” he added.

Coltrin, 2014 Shepherd University Outstanding Teacher, is the ninth person featured on the READ poster, which will hang in the library along with those from previous years. The outstanding teacher award is given to a faculty member who shows a willingness to explore new teaching and learning initiatives, enjoys strong student support, and embodies excellence in all aspects of the profession.

The library started the READ poster series in 2011. The first poster featured the Scarborough Society board of directors and commemorated the group’s tenth anniversary. Posters also feature Shepherd President Dr. Suzanne Shipley, five Shepherd outstanding teachers, and two West Virginia professors of the year. The program at Shepherd is modeled on the American Library Association’s Celebrity READ Posters in which famous people pose with their favorite book to encourage reading.

Coltrin hopes being featured on the poster at Shepherd with “Les Misérables” will encourage people to consider reading longer books.

“Maybe if nothing else it will inspire somebody to not be intimidated by the scope of a book, or the thickness, or how many pages there are, but to recognize that despite the scariness of the endeavor of tackling a big, thick book like ‘Les Misérables’ they can also be the most rewarding experiences as a reader,” he said. 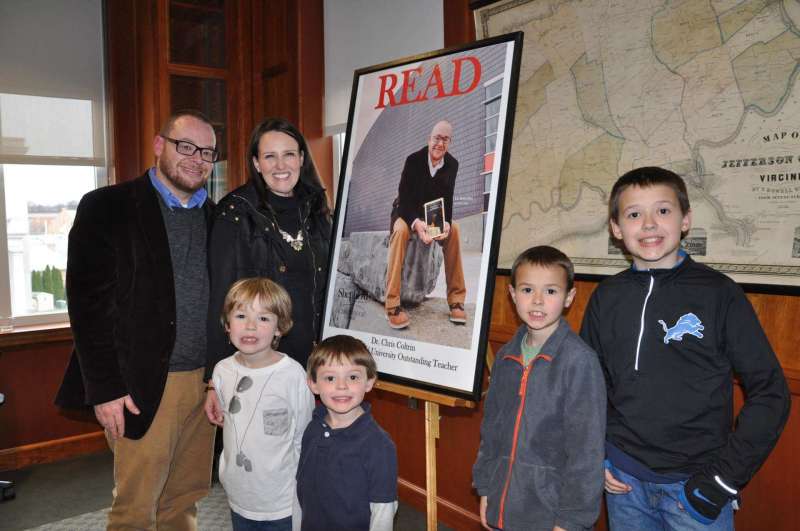