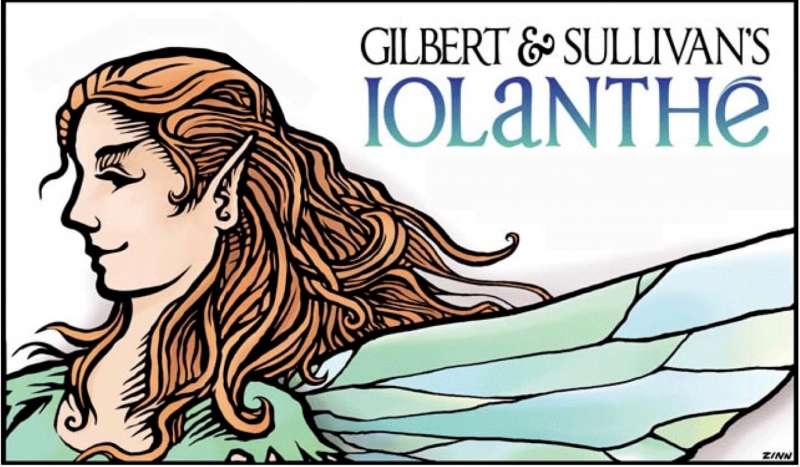 The Shepherd University Department of Music presents Gilbert and Sullivan’s brilliantly comic operetta Iolanthe or The Peer and the Peri, on Friday and Saturday, February 12 and 13 at 8:00 p.m., and Sunday, February 14 at 3:00 p.m. in the Frank Arts Center Theater.

Iolanthe, or The Peer and the Peri, a comic opera with music by Arthur Sullivan and libretto by W. S. Gilbert is the seventh collaboration of the fourteen between Gilbert and Sullivan. The first of Gilbert and Sullivan’s operas to premiere at the Savoy Theatre in London, it was first produced on 25 November 1882, and ran for 398 performances. The story concerns a band of immortal fairies who find themselves at odds with the House of Peers, and the opera satires many aspects of British government and law.

Directing this production of Iolanthe, Dr. Rob Tudor, is Shepherd University Director of Vocal Activities and Department Chair. He enjoys a vibrant career in the genres of opera, early music, musical theater and cabaret, and as a concert soloist and stage director throughout the United States.  Since 2007, Dr. Tudor has been featured annually as guest artist in the Montana Early Music Festival, and returns to Montana each summer as an artist and instructor at the Helena Choral Festival, where he directs, teaches and appears as soloist in recitals and concerts. In 2012, he was honored to appear as guest artist at The Art of Argento – a two-week celebration of the music of contemporary American composer Dominick Argento at the University of Maryland.  During his residency at the festival, he performed Argento’s powerful solo work for baritone The Andree Expedition and the mono-dramatic opera A WaterBird Talk. He brings to Shepherd over sixteen years’ experience directing opera and musical theater including Dido and Aeneas (Purcell), Die Fledermaus (Strauss), The Gondoliers and Iolanthe (Gilbert and Sullivan), Transcendence from The Collaborative Project—a staging of Rejoice in the Lamb by Benjamin Britten, and many scenes from standard repertoire. Stage direction of musicals includes Avenue Q – the Musical (Lopez, Marx, and Whitty), The Apple Tree (Harnick, Bock, and Coopersmith), and Chess (Andersson, Ulvaeus, Rice, and Nelson). Music direction and conducting includes the musicals Little Women (Knee, Howland, and Dickstein), Ragtime (Flaherty, McNally, & Ahrens), Oklahoma! (Rodgers and Hammerstein), and Company (Sondheim).He holds Doctorate in Musical Arts in Voice Performance from the University of Maryland. Awards include an Individual Artist Award from the Maryland State Arts Council and Artist of the Year from Opera Theatre of Northern Virginia.

Music director Barbara Irvine has been a freelance theatre and classical musician for over 30 years. She has been involved in more than 125 musical theatre productions in the United States and Europe, and has given solo classical piano recitals on both continents. Among the luminaries Barbara worked with during her 15 years in New York City, are: composers Cy Coleman, John Kander, Galt MacDermot, Yoko Ono, Mary Rodgers, Harvey Schmidt, David Shire, Charles Strouse, Robert Waldman, and Earl Wilson, Jr.; orchestrators David Cullen and Michael Starobin; and stars Polly Bergen, Sarah Brightman, Patrick Cassidy, Maxwell Caulfield, Michael Crawford, Helen Gallagher, Denise Lor, Rebecca Luker, Julie Wilson, and many more. Ms. Irvine earned her B. Mus. degree in applied piano from Wittenberg University in Springfield, Ohio, and did graduate work in music at The University of Texas at Austin. She has studied piano with the great pedagogue Leonard Shure, and with Danielle Martin, Eunice Norton, Bradford Gowen, Marc Silverman, William R. Walters, and Julia Belle Westphal. A freelance pianist, arranger, music copyist, vocal coach, and music director, she is the founder of The Other Side of Broadway, a concert project devoted to the presentation and preservation of the classical music of theatre composers.

Conductor Kari L. Edge holds a Bachelor of Arts in Piano Pedagogy and a Bachelor of Music Education from Shepherd University. Kari has studied conducting with Dr. D. Mark McCoy, Dr. Erik Jones, and Stephen Czarkowski. She also studied piano with Dr. Scott Beard and Susan Carpenter, voice with Mary Carrigan and Joe Regan, french horn with Paul Hopkins and Daniel Carter, violin with Heather Austin-Stone, and organ with Dr. Claire Johannsen. Most recently, Ms. Edge enjoyed the opportunity to study with Mark Gibson, Director of Orchestral Studies and Conducting at the College-Conservatory of Music at the University of Cincinnati. Ms. Edge has enjoyed being a part of musical theater and opera productions at Shepherd and in the DC area, including performances with the chorus of the Opera Camerata of Washington in their productions of Cavalleria Rusticana, Franz Lehar’s The Merry Widow, and Mozart’s The Magic Flute. While at Shepherd, her performances with the Wind Ensemble and Chamber Singers included engagements in Carnegie Hall, England, Germany, Austria, the Czech Republic, Spain, and a 2013 performance tour of France; culminating with the opportunity to sing for mass at the Cathédrale Notre Dame de Paris.  Ms. Edge also recently served as piano accompanist for the Music Department tour to the Alba Music Festival in Alba, Italy. She has worked as a private piano instructor for the Shepherd Preparatory Program for twelve years. As a conductor, Kari has enjoyed the opportunity to conduct the Wind Symphony, Wind Ensemble, Chamber Singers, Preparatory Chorus, and Preparatory Orchestras at Shepherd University, and the Antietam Women’s Ensemble. She is currently the assistant conductor of the Preparatory Orchestra and works as the Head Program Assistant and Preparatory Division Coordinator for the Shepherd University Department of Music.