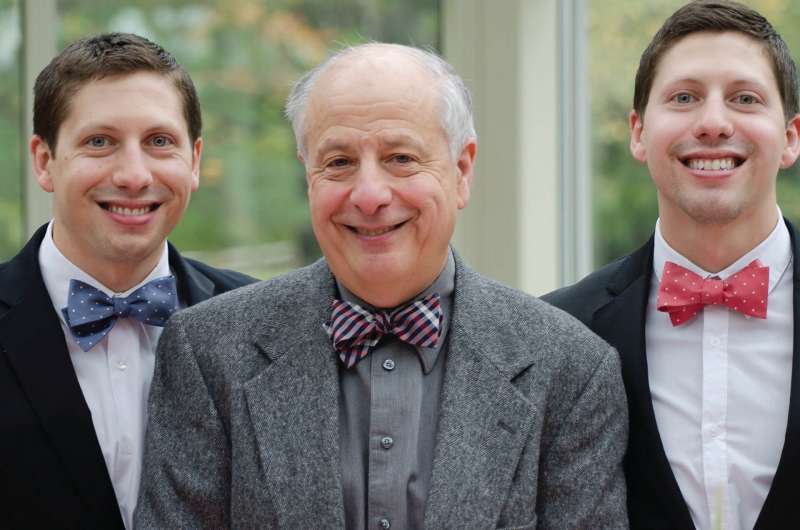 Identical twin violinists Matthew and Michael Polonchak, and their father, Shepherd Bassoon Professor Richard Polonchak, have performed together since 1995. Originally based in Alexandria, Virginia, later in Harpers Ferry, West Virginia, and now in Baltimore, Maryland, the trio has performed concerts and recitals throughout the mid-Atlantic area and is in the process of recording their first CD. Their Salon Series program will include their own transcription of the Bach Double Violin Concerto, a Mozart Serenade and a Haydn London Trio along with Viennese waltzes, Joplin rags, The Beatles, Michael Jackson and Taylor Swift.

The father-son theme is also carried through the instruments. Matthew’s violin was made in Paris in 1879 by Justin Derazey. According to Richard: “We had many violins sent during the next year so that we could find one that matched the Derazey. A year later, one of their conductors in Maryland knew of an instrument in New York that he thought would match—he didn’t know who made it. When it came, it did match the Derazey in sound and in other ways, too. We didn’t know the maker or the age of the instrument at the time. When the papers finally came, we learned it was made around 1850 by Justin’s father, Honore Derazey in Paris!”

The last time The Two Rivers Trio performed on the Shepherd Campus was in December 2000, for the Reynolds Hall Recital Series. Michael and Matthew performed individual violin solos accompanied by Dr. Scott Beard, and the trio played the remainder of the concert.

Michael Polonchak lives in Baltimore. He is principal violist of the Loudoun Symphony and section viola in the Fairfax Symphony and teaches in the Chamber Music Seminar at Goucher College. Matthew currently lives in Philadelphia and is a freelance musician active in the region. Together, in 2014, the brothers formed Two Rivers Chamber Music, which has quickly become one of the premier classical music agencies in the greater D.C./Baltimore metro area. Richard Polonchak is the former principal bassoonist of “The President’s Own” United States Marine Band and White House Orchestra, and has taught bassoon at Shepherd University since 2005.

Sponsored by Jefferson Security Bank, all of the Shepherd University Music Salon Series concerts take place in the W. H. Shipley Recital Hall of the Frank Arts Center and begin at 8:00 p.m. Admission is free and open to the public. For more information about the Shepherd Salon Series or other Music Department events call 304-876-5555.