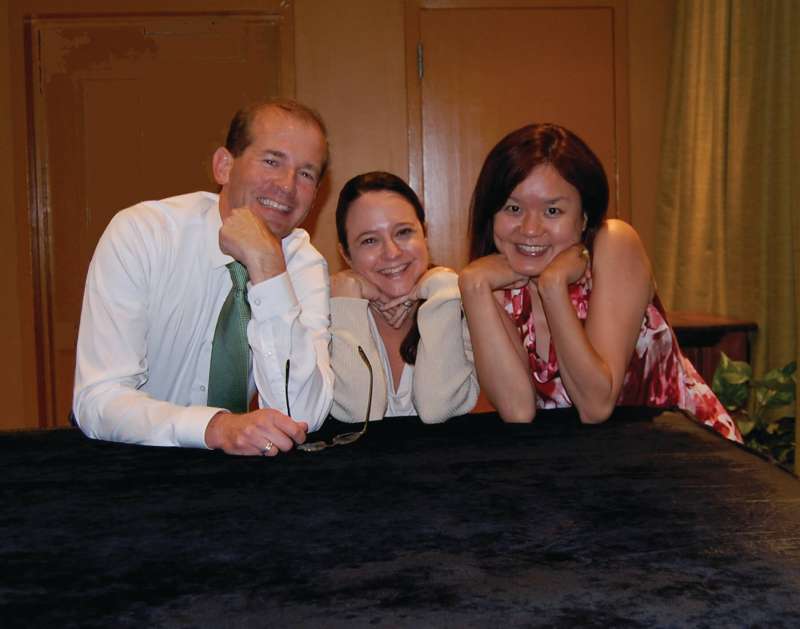 Keyboard trios, music for six hands at one piano, have been a unique part of the piano ensemble repertoire for over 200 years. Our Shepherd faculty pianists will present an entertaining and diverse program of works ranging from some of the earliest works for the genre by W. F. E. Bach (Bach’s grandson!) and Antonius Fodor, to transcriptions by Czerny of The Marriage of Figaro, and original works by Cornelius Gurlitt, Sergei Rachmaninoff, and contemporary German composer Armin Fuchs.

Dr. Scott Beard is a nationally recognized pianist, teacher, clinician, author and recording artist. Recognized for his outstanding teaching abilities, he was named 2006 West Virginia Music Teacher of the Year and is a top 5 finalist for West Virginia 2009 Professor of the year. His students have won prizes in the National Symphony Young Soloists, Beethoven Society, IIYM, IYPAC, and Ithaca international competitions, in addition to state and regional MTNA competitions. He is also the teacher of the 2005 National MTNA Jr. High School Winner and the 2008 Senior Duet Winner. Concerts as a soloist, chamber musician and orchestral soloist have taken him throughout the United States and also to Canada and France. Recent recital appearances include Weill Recital Hall, the Tenri Cultural Institute (NYC), the Polish Embassy, the Russian Cultural Institute and numerous universities throughout the East Coast. His concerts have been praised for their poetry, passion and innovative programming. In May 2009, he toured the Mediterranean as part of the Yale University alumni travel association, performing concerts in France, Italy, Spain, and Croatia. This summer he will again be touring the Mediterranean with Travel Dynamics and Washington & Lee University, performing concerts in France and Italy. Dr. Beard has published articles in several national publications and his anthologies of ensemble music for piano are published by Alfred. He is currently Professor of Music and Dean of Graduate Studies and Continuing Education at Shepherd University in West Virginia and Associate Artistic Director of the Opera Camerata of Washington.

Originally from Taipei, Taiwan, Dr. Yu-Hsuan Liao, Director of Keyboard Studies at Shepherd University since 2011, received her Masters and Doctoral Degrees of Musical Arts in Piano Performance from University of Texas at Austin under Danielle Martin, Dariusz Pawlas, and Gregory Allen. She began her musical studies in Tung-Hai University under Thomas Linde, receiving her Bachelor of Fine Arts degree. She is a piano soloist, collaborative artist, and music educator. She has expanded her repertoire in instrumental, chamber, vocal and choral music in various styles and periods. Dr. Liao worked with “American Repertory Ensemble” and performed piano solo, chamber and accompanying vocal music in the company’s performance series. Her solo performance with A.R.E. (“Valses Poéticos”, Passion at Play) was nominated for best instrumentalist in the Austin Critics Table Award for season of 2008-2009. She gave a piano lecture-recital based on her published book (2009) titled “Manuel de Falla’s Cuatro Piezas Españoles: Combinations and Transformations of the Spanish Folk Modes” and a solo piano performance in composers’ new composition concert at the College Music Society conferences. She is an active member of the West Virginia Music Teachers Association, and has been granted the National Certification for Teacher of Music (NCTM) by Music Teachers National Association (MTNA). She is the district chair of Eastern Panhandle Music Teachers Association and WVMTA state collaborative performance chair. She regularly gives master classes and is in high demand for adjudication at festivals and competitions around the West Virginia, Maryland, Virginia, and D.C. region.

Dr. Laura Renninger is not only the Dean of Teaching, Learning and Instructional Resources at Shepherd but also Professor of Music and Coordinator of Music History and Appreciation. She teaches courses in Music Psychology, World Music, and Western Music History. She received her Bachelor’s of Music degree in Performance from Miami University and both her Master’s of Music and Ph.D. degrees in Musicology from the University of Illinois at Urbana-Champaign. Dr. Renninger’s research is concentrated primarily in the area of Music Cognition, an area for which she is internationally known and has been presented at several conferences throughout the United States, Europe, Asia, the Middle East and Oceana. In the summer of 1998, her work was chosen as one of the best new research studies at the Fifth International Conference on Music Perception and Cognition held in Seoul, Korea, and was published in the fall of 1999 in the book Music, Mind and Science. Dr. Renninger’s recent research has been published in the leading music psychology journal, Music Perception. In addition to her scholarship, Dr. Renninger is an accomplished musician who has had a diverse range of musical experiences and has won several awards including the Toledo Ohio Young Artist Award. She has performed numerous times as a soloist with the Toledo Symphony Orchestra and has worked for several years as a rehearsal accompanist, chamber musician and church organist. She currently serves as the accompanist for the Shepherd Three wind trio.

Sponsored by Jefferson Security Bank, all of the Shepherd University Music Salon Series concerts take place in the W. H. Shipley Recital Hall of the Frank Arts Center and begin at 8:00 p.m. Admission is free and open to the public. For more information about the Shepherd Salon Series or other Music Department events call 304-876-5555.