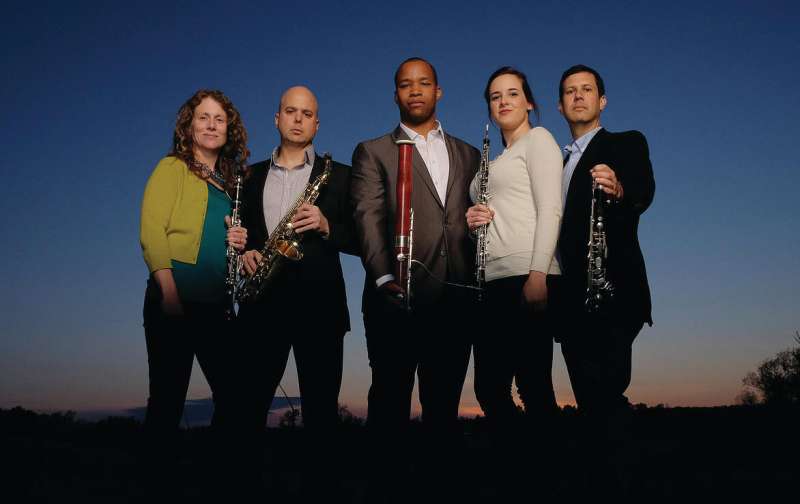 Shepherdstown, WV—Shepherd University Department of Music presents the Atlantic Reed Consort on Thursday, October 8th at 8:00 p.m. in W. H. Shipley Recital Hall of the Frank Arts Center, the third concert of the 2015-2016 Music Salon Series, sponsored by Jefferson Security Bank, The performance is free and open to the public.

A quintet comprised of all reed instruments, the Atlantic Reed Consort’s cutting edge sound and style embraces the experimental, as well as adding a new twist to the likes of Bach, Vivaldi Debussy, Bartok and even Zappa. Featuring Emily Snyder on oboe, Brooke Emery on clarinet, Shepherd faculty Jeremy Koch on saxophone, John Romano on bass clarinet, and Eddie Sanders on bassoon, the Atlantic Reed Consort’s instrumentation lends a fresh new sound to the quintet medium bringing chamber music to a broad audience in an unexpected format. Their latest recording project, featuring works by Vivaldi, John Elmquist, Elgar, and Greg C. Brown, has been released and is now available through iTunes and CD Baby.

Jeremy P. Koch is an active saxophonist, chamber musician and teacher based in the Washington D. C. area. He has been a member of the USAF Band since 1998 where he has been a featured concert soloist on national tours as well as performed with diverse artists such as: Tony Bennett, Wynonna Judd, and Kool & the Gang. As a freelance saxophonist, Koch performs with The United States Air Force Saxophone Quartet, Atlantic Reed Consort, Fairfax Symphony Orchestra, Two Rivers Chamber Orchestra, Prince William Symphony Orchestra, Serapis Ensemble, DC Syndicate and Great Noise Ensemble. Committed to teaching, he regularly presents clinics and recitals throughout Northern Virginia, Maryland, and Washington D.C. In addition, he has presented saxophone clinics at numerous universities including the Universities of North Carolina, Missouri, Illinois and Indiana and North Dakota State University. He maintains a private studio in Northern Virginia and is professor of saxophone at Shepherd University and Northern Virginia Community College. A proponent of new music, he has premiered solo and saxophone quartet works at numerous conferences of the World Saxophone Congress, North American Saxophone Alliance, International Saxophone Symposium and the American Composers Forum. He can be heard with AUR on America’s Millennium Tribute to Adolphe Sax, Volume III performing John Howell Morrison’s Light Possessing Darkness. Most recently he has formed a new music duo, Six Impossible Things, commissioning and encouraging young composers by introducing these works to the general public. Koch holds a Bachelor of Music Performance from Luther and received a Master of Music Performance from the University of Illinois at Urbana-Champaign, where he performed with the Illinois Symphony Orchestra, Sinfonia da Camera, Prairie Ensemble, and Estilo Chicago. His teachers include Debra Richtmeyer, Jonathan Helton, Michael Chesher, and Jean-Marie Londeix at Le Domaine Forget.

Originally from Newark, Delaware, Emily Snyder is an oboist and English hornist with The United States Air Force Band, Washington, D.C. She is a member of the United States Air Force Woodwind Quintet and the United States Air Force Reed Quintet. Prior to joining the Air Force, Sergeant Snyder earned her Bachelors of Music degree from Rice University in Houston, Texas where she studied with Robert Atherholt. From 2007 to 2009, she was the principal oboist of the Philadelphia Youth Orchestra and toured with the orchestra in Brazil. In 2008, Snyder was the concerto competition winner with the Newark Symphony and Kennett Symphony Orchestras and performed Marcello’s Oboe Concerto with both orchestras. She has studied privately with Jonathan Blumenfeld in Philadelphia and, during the summer, participated in the Boston University Tanglewood Institute, the Texas Music Festival, the Banff Music Festival and has performed in the National Repertory Orchestra.

A graduate of Central Michigan University in Mt. Pleasant, Michigan, Brooke Emery received a Bachelor of Music degree in Music Education in 2001. During her undergraduate studies, she was the winner of the 1999 CMU Concerto Competition and a soloist at the 2000 Contemporary Clarinet Conference at Bowling Green State University. She earned a Master of Music degree in 2003 from the University of Cincinnati College-Conservatory of Music, where she was a graduate assistant. She is currently Eb clarinetist with The United States Air Force Band, Washington, D.C.. Ms. Emery has also played frequently with the Saginaw Bay Orchestra and the Midland Symphony Orchestra. Her former teachers include Dr. Kennen White and Ron deKant. She has appeared with such talent as Doc Severinson, Richard Stoltzman and the late Fred Mills.

Clarinetist John Romano has been the bass clarinetist for the US Air Force Band since 2000. He received his bachelor of music degree (magna cum laude) from Shenandoah Conservatory in 1991.  He was a clarinetist and saxophonist with the Air Force Band of the Golden West near San Francisco, California from 1993-2000. During that time he performed in many Bay Area groups including the San Francisco Concerto Orchestra, Berkeley Symphony and California Wind Orchestra.  Since moving to Washington, DC, Romano has focused on performing in and arranging for various chamber music groups, including clarinet quartet, recorder ensemble, and reed quintet. Mr. Romano has been a featured soloist with the Air Force Band and North Bay Symphony. He has also performed at the Oklahoma Clarinet Symposium and FAME Music Festival in Lawrence, New Jersey. Additionally, he has given recitals, clinics and masterclasses in schools and universities across the country and also frequently performs with his wife, flutist Charlene Romano, as Duoromano.

Eddie Sanders is Principal Bassoonist with the United States Air Force Band in Washington, DC.  He joined the Concert Band in 2000, and quickly added to his duties by becoming the bassoonist in the Air Force Woodwind Quintet and in the Air Force Orchestra. Mr. Sanders received a Bachelor of Music in Bassoon Performance from Towson University in Maryland, and teachers include Lewis Lipnick, Gene Griswold, and Linda Harwell. Mr. Sanders performs regularly in the Washington, DC area and frequently gives master classes throughout the continental United States and Puerto Rico. He has on many occasions been featured as a bassoon and contrabassoon soloist with the United States Air Force Band.

Sponsored by Jefferson Security Bank, all of the Shepherd University Music Salon Series concerts take place in the W. H. Shipley Recital Hall of the Frank Arts Center and begin at 8:00 p.m. Admission is free and open to the public. For more information about the Shepherd Salon Series or other Music Department events call 304-876-5555 or visit www.shepherd.edu/music.