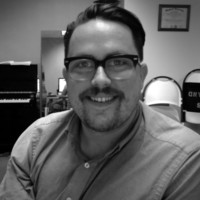 Thom Huenger is a proud graduate of Shepherd University where he received his BA inmusic composition and studied with Dr. Nathan Lincoln-Decusatis and Dr. Mark Andrew Cook. Huenger went on to receive his MM in music composition from Shenandoah Conservatory where he studied with Dr. David T. Little and Jonathan Newman. During his education Thom has had the great fortune of taking part in numerous master classes with many of today’s leading composers including, Kevin Puts, David Lang, Jennifer Higdon, Missy Mazzoli, and Ken Thomson. Thom is a company member with the Maryland Ensemble  Theatre in Frederick, MD, where he has written music and done sound design for numerous productions including, A Clockwork Orange, Antigone, In the Next Room (the vibrator play), and 1984. In addition to his incidental music and sound design for the stage, Huenger has also been composer for three original musicals, Robinhood: Occupy Sherwood, Oedipus Rox, and the NYC Fringe Festival award-winning The Young Olympians. Huenger was also composer for film projects upon occasion and in 2008 won Best Music at the Frederick 72 Hour Film Festival. In addition to his work as a composer, Thom is a founding member of the “folk-rock” group Silent Old Mtns. and has toured the country as their keyboardist and vocal arranger.