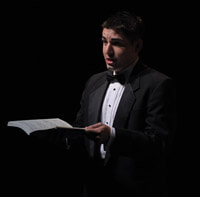 Dr. Joseph Regan is a successful singer and voice teacher based in the Mid-Atlantic region who has performed all over the Eastern Seaboard. Joseph can be seen on the opera stage where he has performed the roles of Fenton from Verdi’s Falstaff, Tamino from Mozart’s Magic Flute, Jenik from Smetana’s Bartered Bride and many more. Mr. Regan is also an accomplished performer of musical theatre. He has performed Henrik in Sondheim’s A Little Night Music, Nicely-Nicely Johnson from Loesser’s Guys and Dolls, and has performed a number of cabaret and recital programs dedicated to the style. In addition to his work in opera and musical theatre, Mr. Regan is a well known for his work in the field of oratorio. He has sung Handel, Haydn, Mendelssohn, Mozart, and is particularly notable for his expertise singing Bach. He has performed the St. John Passion solos on multiple occasions and has performed more than a dozen of Bach’s Cantatas. In addition to his work as a soloist, Mr. Regan is also a highly sought after ensemble singer and sings regularly with the Washington National Cathedral, The Countertop Ensemble with whom he has completed several successful concert tours, and other well respected choral ensembles in the Washington/Baltimore area. Mr. Regan received his Bachelor and Master of Music degrees from the Peabody Institute of the Johns Hopkins University, and completed his Doctoral studies at the University of Maryland College Park.