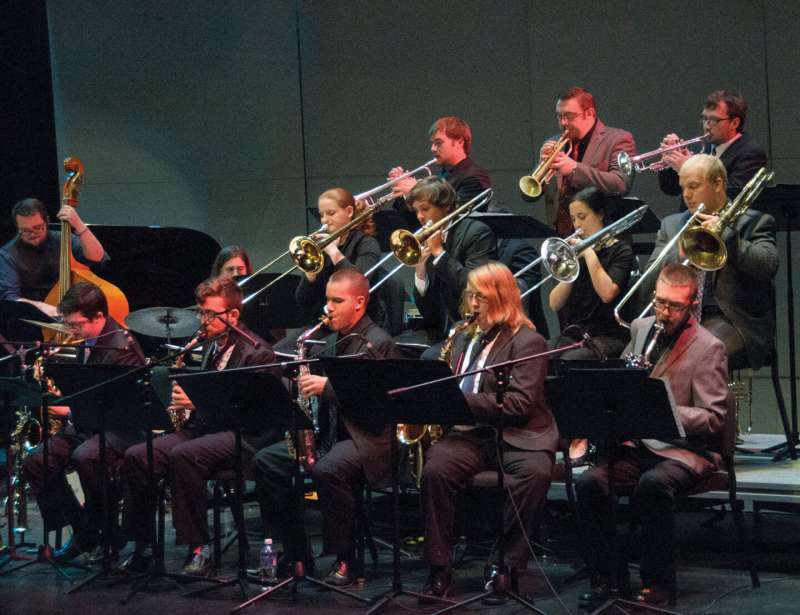 Come join us for a great night of Jazz at the Frank Arts Center Theater on Sunday, April 17 at 7:00 pm, with the Shepherd Jazz Ensembles under the direction of Dr. Kurtis Adams. A wide range of music will be performed, including works by works by Charles Mingus, Billy Strayhorn, Duke Ellington, Mark Taylor, Radiohead, and Horace Silver. “A Tisket, A Tasket” by Ella Fitzgerald and Al Feldman, and “A Flower is a Lovesome Thing” by Billy Strayhorn will feature Shepherd senior Jordan Bushong-Taylor (Myersville, MD) on vocals.

Dr. Kurtis Adams, originally from Nashville, TN, has been a Frederick, MD resident since joining the faculty at Shepherd University in 2010 as Director of Jazz Studies. Previously on the faculties of Gordon College and Boise State University, he completed his graduate studies at the University of Colorado in Boulder, where he performed with the Colorado Symphony Orchestra, Colorado Music Festival Orchestra, Ultraphonic Jazz Orchestra, Metropolitan Jazz Orchestra, and the 9th and Lincoln Orchestra, and shared the stage with great musicians including Arturo Sandoval, Paquito D’Rivera, Greg Gisbert, Pat Bianchi, Jeff Jenkins, Brad Goode, Peter Sommer, and Paul Romaine. As a member of the Jazz Ensembles at CU, Kurtis performed with guest artists such as Joe Lovano, Conrad Herwig, Jiggs Whigham, Tom Harrell, Bobby Shew, and Bob Mintzer. In 2005, Downbeat Magazine named Adams College Co-winner for Best Original Composition for his composition “Instable Mate?” and in 2007 he was selected to participate in the Paquito D’Rivera Latin Jazz Workshop performing with the Grammy-winning saxophonist at Carnegie Hall in New York.

The Shepherd University Jazz Ensemble has performed throughout the East Coast and Europe and is in great demand as a feature band in Jazz Festivals around the globe. Invited to the world-renowned Montreux Jazz festival in 2003, The Jazz Ensemble played throughout Switzerland and Italy on a 9-day concert tour. In 1999, the band took their Ellington Tour to England and France. In the United States they have been featured at the Longwood, the Blue Ridge, and The East Coast Jazz Festivals, as well as regional festivals throughout Virgina, West Virginia, Pennsylvania and Maryland, Delaware and New Jersey. The ensemble most recently traveled to Charleston, WV to perform at the West Virginia Music Educators Association (WVMEA) Annual Conference in March.

General admission to the Shepherd Jazz Ensembles concert is $10 for adults; $5 for Shepherd faculty, staff and alumni, and seniors and students 18 and under; and free to Shepherd students with Rambler ID. Admission and seating is first-come first-serve and reservations are not taken. Box office opens one hour prior to performance. For more information call 304-876-5555.