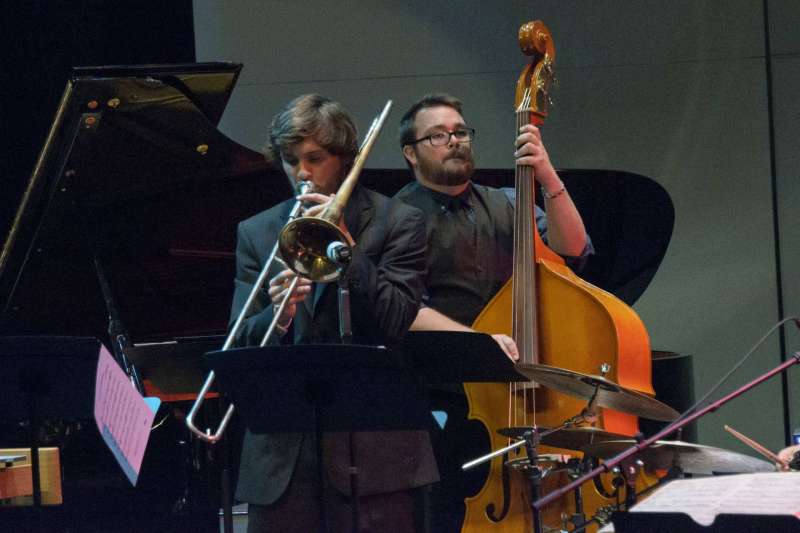 Come join us for an intimate night of jazz at the W. H. Shipley Recital Hall in the Frank Arts Center on Thursday, March 24 at 8:00 PM, with Shepherd University Jazz Combos, under the direction of Kevin Pace and Anthony Pirog. Admission is free and open to the public.

A winner of the Louis Armstrong Jazz Award, bassist Kevin Pace is gaining the attention of the straight-ahead jazz scene. He has performed with musicians such as Gretchen Parlato, David “Fathead” Newman, Jon Metzger, Freddie Redd, Jon Ozment, Steve Fidyk, Steve Abshire, John Jensen, and Greg Hyslop, a four-star recording artist in Downbeat Magazine. Pace has toured throughout Germany and Austria as well as in his own area, including a several spots at the East Coast Jazz Festival, where he returned as an assistant clinician for the 2002 festival and as a member of the Adam Janjigian Quartet in 2004 and 2005. He is also active as a composer and arranger. Among other projects, Pace has completed the soundtrack for Elon University’s Global Studies CD-Rom (Carpe Viam Press, 2001) and “How To Carve A Pumpkin” (Beardog Productions, 2004), an independent film by Rady Large. As well as being an active jazz musician Pace has become one of Maryland and central North Carolina’s most reliable freelancing bassists performing in the orchestra of the Long Leaf Opera Company of Durham North Carolina and in pit orchestras for musicals such as “Urinetown”, “A Chorus Line”, “The Music Man”, “Company”, and over thirty more throughout the East Coast. Pace earned his B.A. in music from Elon College and has completed a MM in jazz performance at the University of Maryland. He joined the music faculty of Shepherd University in Fall 2013.

Anthony Pirog joined the Shepherd University music faculty last year, having established a reputation as a masterful guitarist, capable of using his studied yet unorthodox voice to fit a wide range of musical styles including jazz, country, fingerstyle and old time music, free improvisation, free jazz, surf and experimental music. He studied jazz guitar at Berklee College of Music in Boston, and received his degree in jazz performance from NYU in 2004. Pirog has played with musicians across a wide spectrum of styles and genres, performing with renowned avant jazzers such as Henry Kaiser, Elliot Sharp, Michael Formanek, Ches Smith, Mary Halvorson, William Hooker, William Parker, Eyvind Kang, Skuli Sverrisson, Allison Miller, Jon Irabagon, Doug Weiselman, Susan Alcorn, Dave Ballou, Andrew Bishop, Balázs Pándi, Gino Robair, Tatsuya Nakatani, James Brandon Lewis, Jessika Kenney. He has played in myriad jazz, electronic and improvisational groups up and down the East Coast, including Out of Your Head Collective, Better Than Lost, Beep Honk, Kung Fu Bastard, The Landscaping Crew, The Bobby Muncy Quartet, Ad Hoc Quartet, Inner Loop and Stylus. He has performed with rock, roots and rockabilly musicians and ensembles like Bill Kirchen, Tab Benoit Billy Hancock, Dave Elliot, Joe Stanley, The Dave Kitchen Band at SXSW 2008, The El Rays, The Rocking Bones and many, many others. He also played with ex-Smashing Pumpkins drummer Jimmy Chamberlain in the rock trio Skysaw. Pirog leads several groups of his own including The Anthony Pirog Trio, Quintet, Sextet and Septet. He led a 22-member ensemble in performance of Terry Riley’s “In C” at the D.C.-area festival for new music, Sonic Circuits Festival of Experimental Music. He went on to record a similar session, leading a 30-piece ensemble playing “In C,” released in 2014. In 2011, the Washington Area Music Association (WAMA), Washington’s most prestigious music awards, named Pirog Washington’s Best Modern Rock Instrumentalist. In 2012 he was awarded a “Jazzie” by The Washington City Paper as Best Guitarist 2012, “the hands-down victor.” The Washington Post praised his music in 2012 for its “fusion of talent and creativity.” He was featured in a September 2012 article in Guitar Player Magazine on “Rising Artists You Must Hear” and in January 2013, he was featured in a 5-page interview in Guitar Player Magazine in which he was praised for his “copious creativity” and “loopy, cross-genre melodicism.”