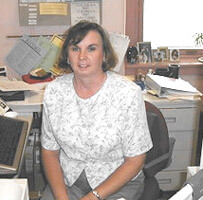 Areas of Specialization
Anything and everything that keeps the Department of English and Modern Languages running!

Ms. Brenda Feltner began her career at Shepherd as secretary for the Division of Languages and Literature in August 1975, directly after graduating from Shepherd with an A.S. degree in secretarial science. While raising a family and working at Shepherd fulltime, she obtained a B.S. degree in business administration in 1994.

Her title is now administrative secretary senior for the School of the Arts and Humanities (Departments of Communications and English & Modern Languages). Brenda has seen many changes at Shepherd and within these departments since 1975, but she still enjoys working with the faculty and especially with the students.

During her years at Shepherd, Brenda has been active in the Classified Employees Council where she has held the office of secretary and served on several committees. Her hobbies away from Shepherd include gardening, cooking, playing piano, bowling, and just enjoying her family.